GLENN HUGHES Talks Classic DEEP PURPLE Live Concert Series Band - "I`m Not A Tribute Artist, I Am The Artist, So I Need People To Be Able To Take Us Back To 1974" 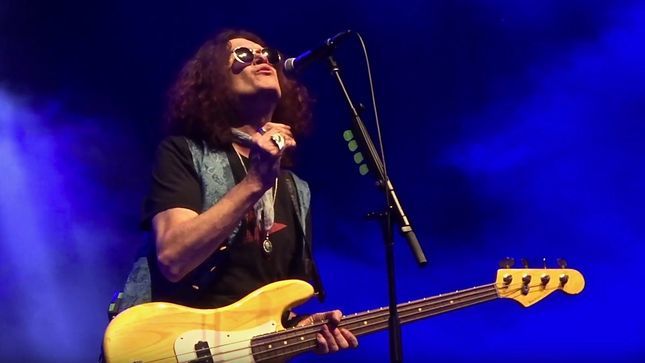 He may have only been a member of Deep Purple for three years, but bassist/vocalist Glenn Hughes helped produce three albums that have stood the test of time almost four decades later. Mick Burgess at Metal Express Radio called up Hughes to discuss his latest tour celebrating his tenure in Deep Purple, asked about the prospect of a new Black Country Communion album, and working with guitarist Tony Iommi again. Following is an excerpt from the interview.

MER: This tour is a Glenn Hughes Performs Classic Deep Purple Live set.  Why did you decide to go out on the road and devote a whole set to Deep Purple?

Hughes: "Big promoters came in and this is what they were wanting me to do. When I`m working with promoters who are deadly serious about my art then I will be dedicating myself to that.  When we are talking Glenn Hughes performs Deep Purple this is exactly what it is.  I am not Deep Purple. I was in the band, I am not a tribute artist and I am playing songs that I wrote and recorded."

MER: Is this going to be a romp through the studio versions of the songs or will you be stretching them out and performing them like you did live back then?

Hughes: "Some of them will be. 'Stormbringer' and 'Might Just Take Your Life' may well be faithful takes on the studio versions, but others like 'Gettin` Tighter' will be more like the Live At Long Beach version and 'You`ll Fool No One' will be like the Californian Jam version. They`ll be elongated versions, but songs like 'This Time Around' and 'You Keep On Moving' will be just like the album, but if we feel like heading off musically like we did with Blackmore and Lord then that`s what we`ll do. I`m going back to that `70s approach to capture the energy of those times."

MER: Recreating those parts done by the likes of Blackmore, Lord and Paice will always be a challenge. Who do you have in your band for this tour?

Hughes: "I have a new band for this tour. Jeff Kollman is back on guitar he has the ability and Ritchie Blackmore knowledge to play these songs perfectly. I also have Mike Mangan on Hammond organ and he plays with me in the Kings of Chaos and on drums Eduardo Balbas who is an Ian Paice style of drummer. If I`m going to be doing a tour of this magnitude then I want the right people in the team. I want the striker to come off the bench and pop one in the corner so that`s why I’ve got these guys in as I know they can do it and I`ll be able to storm down the front of the stage and do my thing. I`m not a tribute artist, I AM the artist, so I need people to cover me and be able to take us back to 1974. If Glenn is going to play classic Deep Purple live, Glenn needs to bring the right people in and I think I have the band to do that."

In the video below, Glenn Hughes discusses his most recent touring project, fronting his Classic Purple Live series of shows. Glenn explains to Australian TV presenter Dave Loader what made him take on the challenge.