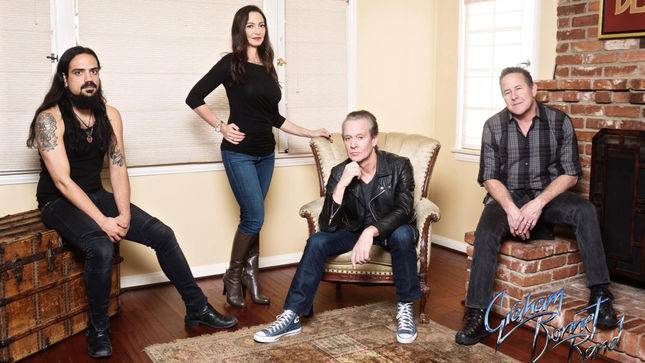 The Graham Bonnet Band will release a brand new album, The Book, on November 4th. An EPK (Electronic Press Kit) video can be found below.

Graham Bonnet  is a rock legend. With a pedigree that includes Rainbow, MSG, Alcatrazz, and Impellitteri, he is one of the finest vocalists of his generation.  His is a recognizable and unique voice on a number of classic hard rock albums, including Rainbow's Down To Earth (1979), Michael Schenker Group's Assault Attack (1982), Alcatrazz's No Parole For Rock ’N’ Roll (1983) and Disturbing The Peace (1985), and Impellitteri's Stand In Line (1988).

The new album, The Book, offers 11 new songs where Bonnet lays down his legendary vocals over a selection of hard rock tunes that are chock full of great hooks and melodies. "The songs on the album are very similar to what I have done in the past with Rainbow, Alcatrazz and MSG," says Graham. "I think this is what people want to hear from me and won't be disappointed."

Graham Bonnet is in fine form and the album is easily his best in decades: 11 new tracks that will blow hard rock fans away! The album also includes a bonus disc featuring re-recorded versions of some of the most well known classics he has sung in his solo career and with Rainbow, Alcatrazz, MSG and Impellitteri.

The Graham Bonnet Band has spent the last 12 months touring solidly around the world, with performances at several major European festivals including an acclaimed set at Sweden Rock 2016. The Book will be supported with several shows in the UK and Spain in 2016, with more dates to be added.

Disc 1
“Into The Night”
“Welcome To My Home”
“Earth's Child (I Am Your Son)”
“Rider”
“Dead Man Walking”
“Strangest Day”
“The Dance”
“Where Were You?”
“The Book”
“Everybody Wants To Go There”
“California Air”

Disc 2 (Re-Recorded Classics)
“Eyes Of The World”
“All Night Long”
“Lost In Hollywood”
“Since You Been Gone”
“Night Games”
“S.O.S.”
“Assault Attack”
“Dancer”
“Desert Song”
“Island In The Sun”
“Hiroshima Mon Amour”
“God Blessed Video”
“Will You Be Home Tonight”
“Witchwood”
“Stand In Line”
“Here Comes The Night (Down Without A Fight)”