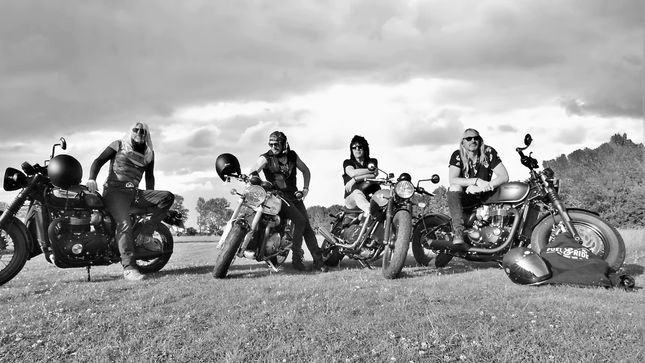 Marshall Records has released Grand Slam's Hit The Ground album. You can buy/listen to the album here. The title is available on CD, LP, digitally and on limited edition gold vinyl.

Back in the post Thin Lizzy days, Laurence Archer wrote and performed with Phil Lynott. Sadly, Grand Slam was cut short in its prime, with Phil Lynott’s untimely death leaving a hole in the fabric of rock music to this day. Laurence went on to make his name playing with UFO but always nurtured a long-term plan to rebuild the Grand Slam machine. And here it is... primed and ready.

The new band (Laurence alongside Mike Dyer, Benjy Reid and Dave Boyce) honours the band’s history whilst also looking to the future - classic tracks co-written by Lynott and Archer sit alongside a set of brand new songs that embody the same ethos of freedom, positivity and adrenalin that ran through Grand Slam in 1984.

“There’s a range of demos and recordings from different places and strange mixes out there,” Archer tells Nova.ie. “When we finished recording we’d go back to Phil’s house and add experimental guitar parts and experimental vocals, and a lot of the stuff that’s out there are those experimental mixes. They’re not finished.”

Until now. An audio interview with Archer can be heard at Nova.ie.

"Gone Are The Days" video: