According to Billboard.com, Guns N' Roses were detained at the Canadian border for having a gun on board, frontman Axl Rose revealed to the band's Toronto’s Rogers Centre crowd last night (July 16th).

“You did what? What? ‘Oh, yeah, we found a gun.’ So we weren’t exactly arrested, we were detained,” Rose said, smiling, and emphasizing the word “detained.” He nodded to Slash, as he paced the stage, continuing his tale from the road.

A Guns N’ Roses representative confirmed the story to Billboard.

Must say, after all the bad blood and the going on late stuff, singing AC/DC sitting down, even the whole bloody having it in my head since 1987 that Appetite for Destruction was just a really, really good album and not the insane cultural talisman that it quickly became… I’ve always been a bit of a take it or leave it Guns N’ Roses fan—good, band, I’m there for all of it, but just one of many makers of CDs on the shelf. But seeing Axl just absolutely take control last night (July 16th) at a jam packed Rogers Centre—our stadium, not our arena, probably about 55,000 people in there—I’m a convert. And yes, as I sit here writing this, I’m listening to Goddamn Chinese Democracy!

Seriously, the whole time my mind was reeling with this idea that there are so many heritage front men who should be giving it up, and if any of them show up to be spanked on this limited tour, they’d be seriously considering their own inadequacies, if they were wont to compare notes, art against art. Fact is, Axl Rose is a frightening vocal powerhouse still, and maybe better than he’s ever done. And he’s one of rock’s great front men to boot, from any generation, dancing the stage, runnin’ the stage, stalking the stage, the glares, the thespian expressions, the memorable use of the catwalk and edge-hanging faux-monitor stand, even the hats, the glasses, the frequent wardrobe changes, but even those all within a tight and tasteful range consistent with the iconic Axl character.

In fact, that’s metaphor for one of the biggest surprises here. This was a serious show. This was not Sebastian Bach, Vince Neil or Ozzy Osbourne, this was an artist talking to the crowd the exact amount you’d expect from a canny reader of the situation, like a McCartney, respectfully, barely swearing, no clichés, not too much, not too little. Even the lone always miserably anticipated crowd participation bit was respectful and artfully done. It was for “Knockin’ on Heaven’s Door,” and there was only gentle encouragement, no shaming or berating, spread out over tasteful musical passages of ebbing and waning mood, but ultimately not driven into the ground.

And this in turn was metaphor for the stage show, which was almost in fact too serious. Absolutely crucial and helping make the band shine like the rock gods they obviously are, was state-of-the-art use of close-ups on the two side screens. But as for the light show, the graphic projection, it was almost too classy and too abstract, with very few substantive video images of any sort, and then when they did occur, quite anodyne in every case. The spare pyro also seemed an afterthought, except when it achieved a truly celebratory mood for last encore, “Paradise City,” where there was a sustained although modest firework show, lots of pyro, and red, white and blue confetti.

Yet, testimony to this amazing band, you were never bored. The vibe here really was “Let the music do the talking,” even though that seems preposterous, given the massive size of the show and the fact that there was at least all the above visuals. Lesser bands would not have pulled it off, but Guns put on a relentless display of top-shelf musicianship to match what was one of the great lead vocalist performances I’ve ever seen. Duff “Buff” McKagan did some singing and some acoustic guitar, but otherwise, just played bass, no bass solo. Dizzy Reed, no keyboard solo. Frank Ferrer, rock-solid drummer since ’06, mic’ed and mixed like a a monster set of headphones, no drum solo, and he never broke a sweat. Axl, no vocal solos (and believe me, these exist from lead singers with less justified confidence). And lone backup singer Melissa Reese... looking all anime... she definitely wasn’t even needed, serving almost as, well, another metaphor, that this is a huge production justifying high ticket prices, another kind of Chinese Democracy, as it were.

But there was a vast quantity of dynamo quality guitar soloing everywhere, and not just from Slash, but also from 14-year Guns veteran Richard Fortus, who, as these things seem to go (see Priest) had to look like Izzy Stradlin, although after a while, all I could think of was short-lived Aerosmith guitarist Jimmy Crespo. But man, that guy... you couldn’t keep your eyes off him every time he took a solo. Fortus is every bit the guitarist that Slash is, and presumably recognized as such by the organization, given the show-stopping instrumental guitar jam he and Slash built to insane crescendo within the framework of Pink Floyd’s “Wish You Were Here.” The two gleefully solo-ed up a stormy burbly battle through dozens of other axe-mad solo spots as well, and really, you came away from this nearly three-hour show having witnessed a guitar showcase better than any G3 (the ace card: serving the song), but never for a second forgetting just why Axl commands mass public consciousness on a level like Kanye.

Seriously, systematically, as performance after performance from that guy elevated the band’s hits, taken sort of one-third and one-third from Appetite and Illusion as whatever it is, in reality, something like a 140-minute opus, and then one-third from Chinese Democracy (those songs obviously not hits)... Axl just kept knocking down any of his negatives to the point where barely 30 minutes in you’ve let all bygones be bygones.

Included in that, you gotta love how Axl’s been the architect of this band, which is a compromise between his non-reunion band and the original. I can’t imagine a lineup of Guns sounding and looking and performing and pacing and sequencing their world-beating show better than this bunch of guys. Sure, a few songs were ever so slightly uncomfortably sped up, and the wall of sound (I might add, impressive of range in a challenging environment like the Rogers Center) threatened at times to bury some of the melodies, even on the massive hits. But I came away absolutely more convinced than ever that any amount of luck or overrated-ness that I’ve always in the back of my mind ascribed to this band, was greatly reduced. In effect, it felt like the crowd came for Appetite, but if this ever continues on, next time they’ll be coming because Guns N’ Roses are absolutely one of the most relentlessly professional hard rock bands on the planet right now.

As for highlights? Well, this is probably a bit of a mindblower, but far and away highlight was Chinese Democracy ballad “This I Love,” which of course, hey, like anybody else, I didn’t friggin’ know from Adam, given that it’s track 13 out of 14 songs on that aircraft carrier of an album. Everybody in that goddamn place was as riveted as I was by Axl powering his way through this thing, high notes as regular as you can expect out of Axl, but also high notes using his ungodly caw. And equally surprising to myself, second highlight would be “Civil War,” which, completely without having to say anything from the stage, took on greater significance given recent world events. Again, any other hard rock buffoon would’ve said some stupid shit. Axl just looked everybody in the eye and worked his way like a consummate entertainer through the song, with levity appropriate to the situation.

Again, wrapped up in the conservative light show, the lack of gratuitous solos, hitting the stage on time, not drawing out the encore ritual, mixing it up with a Duff medley, a little “Layla,” a little “Angie,” a massive metal rendition of The Who’s “The Seeker,” and, weirdly, again, Axl’s refreshingly mature approach to any inter-song raps… if I could speak for the crowd, they came away stunned and entertained, but almost a little embarrassed that they didn’t see how serious this band is. Sort of like, er, maybe it would be a good idea if I grew up and cleaned up my act a bit as well. 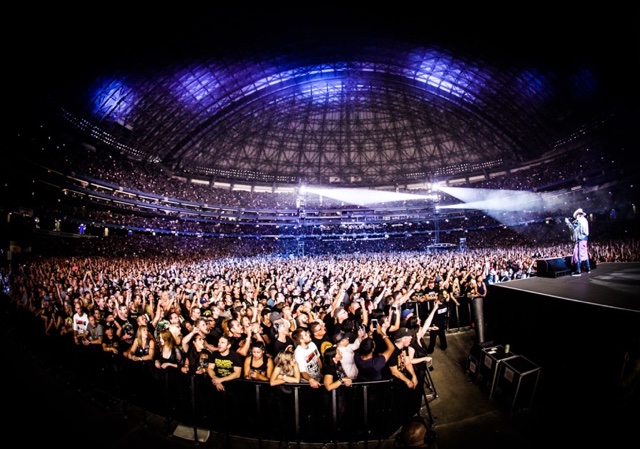 Guns N' Roses performed:
"It's So Easy"
"Mr. Brownstone"
"Chinese Democracy"
"Welcome to the Jungle"
"Double Talkin' Jive"
"Estranged"
"Live and Let Die"
"Rocket Queen"
"You Could Be Mine"
"You Can't Put Your Arms Around A Memory"/"Attitude  "
"This I Love"
"Civil War"
"Coma"
Band intros into Slash solo - "Speak Softly Love" (Love Theme From The Godfather)
"Sweet Child O' Mine"
"Sorry"
"Better"
"Out Ta Get Me"
Jam ("Wish You Were Here" and "Layla")
"November Rain"
"Knockin' on Heaven's Door   "
"Nightrain"
Encore:
Jam with "Patience"
"The Seeker"
"Paradise City"