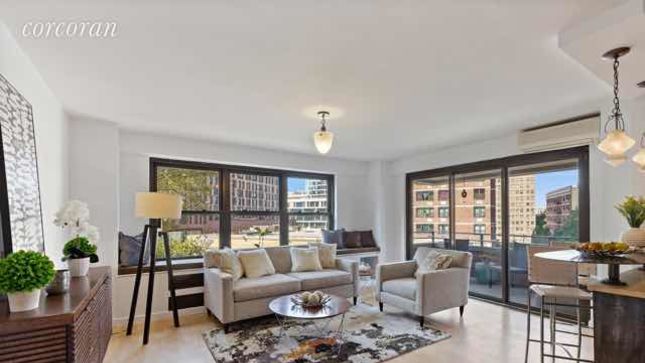 According to his Facebook page, Guns N' Roses guitarist Richard Fortus is selling his apartment on New York's Lower East Side (417 Grand Street) for $1.195 million.

“Know anybody interested in buying my apartment in NYC? It was featured of the cover of the New York Times Real Estate section and in The Post,” Fortus says.

The Corcoran listing page describes the apartment as follows:

Spectacular two bedroom home with open views and a private terrace on the third floor in Seward Park, a premier LES residence, at 417 Grand St D-207. Enter this spacious and open home to the living and dining areas, with a fully equipped chef’s kitchen and enjoy tree-top views and fantastic light. With all stainless appliances including a Wolf range and Viking hood, Subzero refrigerator, Bosch dishwasher and wine cooler, prepare meals with ease and serenity.

According to Barnes&Noble, Mick O'Shea's new book, Dead Straight Guide To Guns N' Roses, will be available on September 23.

Overview: "Guns N’ Roses, or GNR is one of the biggest-selling rock bands of the past 30 years. Forming in 1985, their first album titled Appetite For Destruction followed two years later. With many star performers including Slash, Axl Rose, Izzy Stradlin and later drummer Matt Sorum, the band has always been high-profile. Use Your Illusion I and Use Your Illusion II, recorded simultaneously and released in 1991, debuted at number two and number one on the Billboard 200 respectively and have sold a combined 35 million copies worldwide. The band is currently on a massive world tour, and with talk of a new album, have never been more popular."

Guns N’ Roses have announced the special guests appearing on their Not In This Lifetime Tour, revving back up on September 25. Bishop Gunn, Blackberry Smoke, Dirty Honey, Shooter Jennings, and Tyler Bryant & The Shakedown will open for GN'R on select dates throughout the fall run.

The legendary group returns to the US later this month - their first time touring the United States in 2019. This includes two nights at Las Vegas’ legendary Colosseum at Caesars Palace, their most intimate venue since the 2017 performance at The Apollo Theater. GN'R will also make highly anticipated stops at major festivals, along with two goliath Mexico dates at stadiums in Guadalajara and Tijuana. Tickets are on sale now at LiveNation.com.

In conjunction with the announcement, GN'R has released a video featuring Not In This Lifetime special guests alongside some of the incredible names appearing prior to GN'R on their festival dates including Ice Cube, The Raconteurs, Deftones, and Brandi Carlile. The band will play at Louder Than Life Festival, Austin City Limits, Exit 111 Festival, and Voodoo Festival. Watch the clip below.