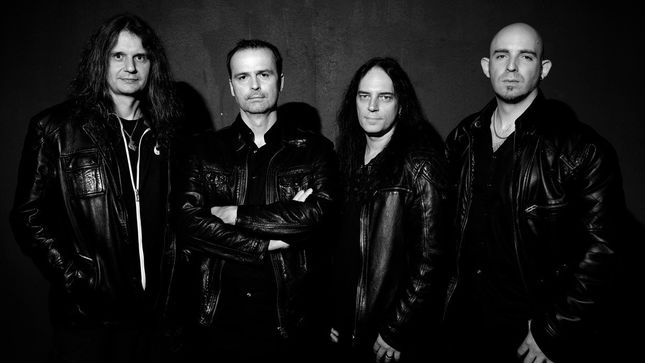 Jimmy Kay from Canada’s The Metal Voice spoke to Hansi Kursch about the new Demon & Wizards record and what to expect from Blind Guardian.

When asked about the musical direction of the new Demons & Wizards album 3:

"The new album is more defined. I would say the Demons & Wizards first two albums have been very strong and they showcased the direction and we established a style apart from what Blind Guardian and Iced Earth were doing over all these years. On this new album there is a strong atmospheric element almost in every song, there is a lot of diversity, we go from alternative sounding songs like, 'Invincible' for example to classic rock songs like 'Children Of Cain' or the intense music like the song 'Diabolic'. Demons & Wizards covers everything from almost folk like songs, to classic rock music of the ‘70s up to almost intense thrash metal. I have to say there is a high variety of different sounding songs on the album, all killer, no fillers. There's a lot of passion on this album and whatever people liked on the first two album with more variety. On the new album we have a song like 'Timeless Spirit' which almost goes into a Pink Floyd direction and another song like 'Children Of Cain' which goes into a doomy Black Sabbath melancholic directions."

When asked if the new album is a lot darker than the first two albums:

"Jon (Schaffer, guitarist) and I feel the album delivers a glimpse of hope so it's not so dark as it appears to people, you're not the first one saying that maybe that's also related to the album cover which is related to the song Diabolic which deals with the fall of Lucifer or the events after the fall of Lucifer when he's joining forces with Beelzebub and Satan to establish other war against heaven.  There is a lot of darkness also in the songs but I said I also feel that there’s always that light at the end of the tunnel."

When asked about the new Blind Guardian album:

“We stopped the first pre-production Blind Guardian yesterday but we will continue in March 2020 and then from April to October / November we will finish the Blind Guardian album. It's another amazing ride the album is more progressive then people probably would expect but it's typical Blind Guardian. When we spoke last time I'd probably not even have been aware of it because I was of the opinion that there still is a lot of orchestration.  Over the last two months I realized it's far less than I thought but as I mentioned it goes more into a progressive direction that is the case they are like three speed thrash metal songs on there and the rest is more on the complex side."

The most ambitious project in the metal history of Blind Guardian, Legacy Of The Dark Lands, is out now. The idea of recording an orchestral album originally formed in the minds of the two leading lights of the Blind Guardian universe - guitarist André Olbrich and singer Hansi Kürsch - during the 1990's when Blind Guardian started to use orchestral elements to enhance their opulent sound. The monumental project started to take shape over recent years, and mirroring its epic sound cascades, the lyrical concept was developed. To create the concept, André and Hansi worked alongside German bestselling author Markus Heitz, whose latest novel Die dunklen Lande was released on March 1, 2019.

Kürsch recently spoke with Dead Rhetoric about the project. Following is an excerpt from the interview.

Dead Rhetoric: This was done for over a 20 year span – what sort of feeling does it finally coming out give you?

Kürsch: "I’m relieved, and I’m just happy that we have come to the point where everyone involved – it’s ready for people to listen to it. I’m overwhelmed still by the amount of work, but I’m more than just proud to have accomplished it and having the chance to give it to the people. That people will have a chance to listen to it – that’s a relief! Over the years, we’ve been talking about that so many times. We’ve had to describe what it would sound like, and what it would be about, musically. I could literally see the question marks over the heads of people who never really understood what we were trying to say. If you haven’t listened to it, it’s very difficult to get an idea of what we are talking about. But once you have listened to it, you just figure, 'It makes sense, what the guys have spoken about for twenty years now.'"

Dead Rhetoric: Given the time involved, do you feel that you were able to go back and tweak things from a technological aspect as you progressed?

Kürsch: "Actually, it’s been the opposite. We’ve really paid tribute to every original intention. That was very important to us. If you could listen to what we did to 'This Storm' or 'Dark Cloud’s Rising' in the beginning, you would figure that the original idea is very much present nowadays in the final recording. But of course, we used the technology over the years to maintain the artificial keyboard quality of the orchestra first, and then improved it much further when working with a real orchestra. Again, if you really listen back to the beginning, you can hear how close it is still to what the final recording is like.

The only difference is that everything feels more on-spot with this album, and we improved the orchestra as much we could to use it as a substitute for the metal band. I would say 'mission accomplished.' We did pre-productions ten years ago, and they were almost identical to what you are listening to now. The curse of the pre-production like this is that you have to top it when recording. That’s one of the reasons the production took so long at the very end."

Watch a new video trailer for the album below:

The Legacy Of The Dark Lands is available in the below formats: