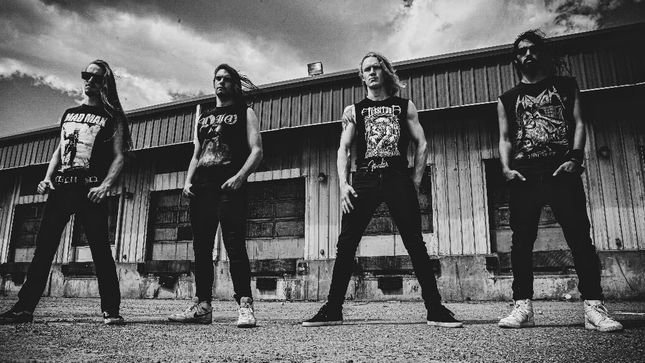 Hazzerd, one of thrash metal's most exciting young contenders, have released a music video for their song “Waking Nightmare”, which captures the raw energy of the Calgary-based quartet as they jam the track live in their rehearsal room (guitarist Toryin Schadlich's basement). Check out the clip – which also features additional conceptual footage by Rafael Ortega of Ecliptic Visions (The Absence, Ayreon):

“Waking Nightmare” is a standout track from Hazzerd's sophomore recording, Delirium. The album – which is available on CD, digital and limited-edition colored vinyl – was mixed and mastered by Johnny Gasparic (Into Eternity) and features cover artwork by Andrei Bouzikov (Municipal Waste, Toxic Holocaust, Skeletonwitch).

Says drummer/vocalist Dylan Westendorp, “'Waking Nightmare' is one of our favorites off the new album, as it is super-aggressive and fast with a melodic build-up intro. The song itself was written about sleep paralysis and how scary that situation can be. A number of people have reported waking up in the middle of the night unable to move and seeing things that aren’t actually there, like monsters, demons, and other apparitions. The video was shot by a local production company called Russman Productions. We were going for that underground / thrash feeling for the video, and we think we got it.”