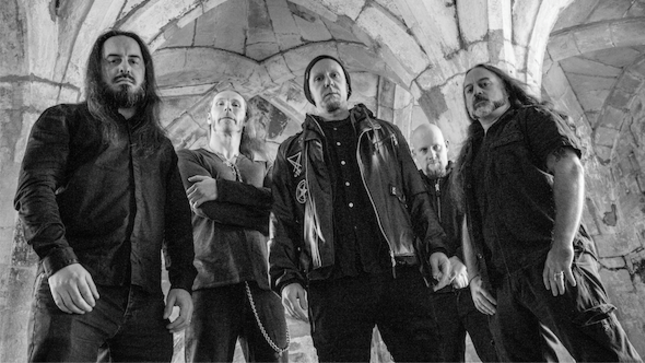 With Embrace Of The Godless Aeon, their first record in five years, proving to be one of the best-reviewed extreme metal releases of the year to date, the UK-based symphonic blackened death metal group Hecate Enthroned have unveiled a lyric video for the album track “Erebus And Terror,” which features guest vocals by Sarah Jezebel Deva (Cradle Of Filth, Therion, Mortiis).

Embrace Of The Godless Aeon, which features cover artwork by Nestor Avalos (Bloodbath, Rotting Christ, The Black Dahlia Murder), can be ordered now on CD and red splatter vinyl at www.m-theoryaudio.com/store. A limited-edition deluxe box set that includes exclusive purple vinyl and cassette editions of the album, a signed photo card and other collectibles is also available. 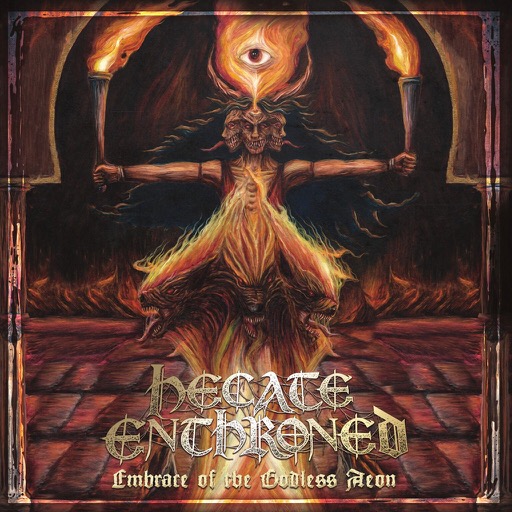 Embrace Of The Godless Aeon - the band's first recording with vocalist Joe Stamps, who joined the band in 2015 - sees the group continue to deftly mix black with death, modern with classic and extreme with symphonic. The album, which features guest vocals on three songs by Sarah Jezebel Deva (Cradle Of Filth, Therion, Mortiis), was co-produced by Dan Abela (Voices, The Antichrist Imperium).

Says Dylan Hughes, “This album with its epic sweeping orchestration and heavy aggression represents a new chapter for us cementing the chemistry of the current lineup and our partnership with M-Theory. A welcome return from Sarah Jezebel Deva hints to the grandiose flavor of earlier releases, but this time, it's tempered with a guitar and drum sound forged from solid steel and then edged by a razor-sharp production from Dan Abela. The summoning of unholy flame and terror that is the cover art is an oil painting commissioned from in-demand satanic artist Nestor Avalos and begins your visceral journey through cold bleak landscapes, crushing tormented seas and searing shards of heavy metal.”

Originally co-founded in Wales by guitarist Nigel Dennen in the mid-1990s, Hecate Enthroned is dedicated to delivering their own brand of evil metal with little regard to politics or the trends of popular demand. The group's 1997 debut, the Andy Sneap-produced The Slaughter Of Innocence, A Requiem For The Mighty (Blackend Records), was a seminal release in the then-burgeoning orchestral black metal movement. Since then, several full-lengths and EPs and numerous live performances have firmly established the band as one of extreme metal's most important voices, a sentiment that Embrace Of The Godless Aeon firmly reinforces.