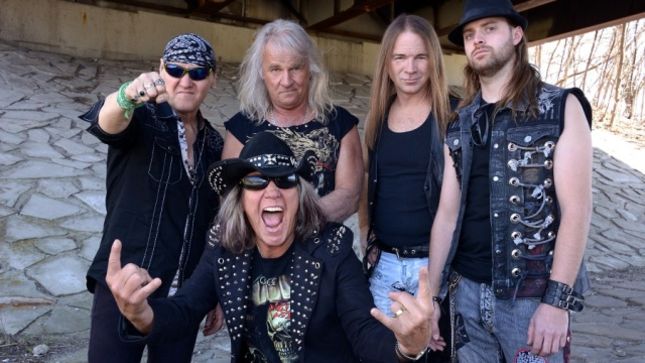 In spring 2020, Canadian legends Helix will be issuing Eat Sleep Rock on their label Helix Records. The album will be limited to 300 units on vinyl.

“It'll contain one brand new song, some that have been released on CD before, some that have been released only on vinyl. Here's the song list:
‘EAT SLEEP ROCK’ (brand new song written by Sean Kelly & myself)
‘Wrecking Ball’ & ‘Shock City Psycho Rock’ (both from the Half-alive album/1996)
‘I'm a Live Frankenstein’ (from my solo CD When Pigs Fly/1999)
‘Even Jesus’ (from the Bastard Of The Blues CD/2014)
‘Cyberspace Girl’ (from The Power Of Rock And Roll/2006)
‘When the Bitter's Got the Better of You’ (from Vagabond Bones/2008)
‘The Tequila Song’ (only released on a two song special vinyl single a couple of years ago w/The Devil is having a Party Tonight)
‘Gene Simmons Says (Rock Is Dead)’ Released previously as a bonus track on E.M.I.'s ICON album & on the CD Rock It Science
‘The Devil Is Having A Party Tonight’ (only released on a vinyl single)

“There will only be 300 units of this album released on vinyl, so it will become a collector's item once again. I'm presently contemplating what I'm going to do for the artwork and we'll probably stage a photo session much like we did when we did the photography for ‘The Devil Is Having A Party Tonight’ vinyl single. As for the vinyl itself, I'm going to do something special, but I don't quite know what yet.”