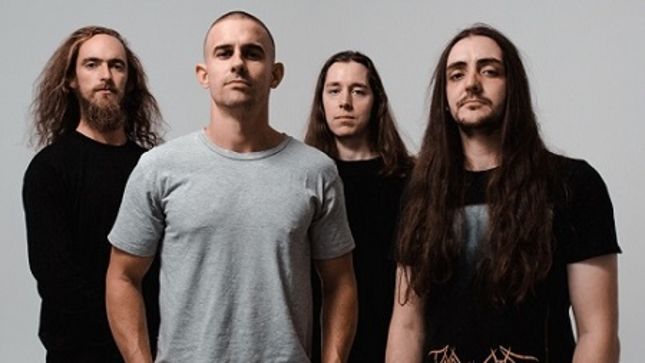 2019 was quite a year for melodic death metal band Hollow World. Not only did the Melbourne natives tour Europe with Psycroptic and Aversions Crown, Australia with Rings Of Saturn, and played the boutique metal festival Halloween Hysteria alongside Ruins, Jet Boys and Hadal Maw. But they also went in search of a new frontman, one that could lead them into their next chapter as one of the most promising bands in the Australian metal scene.

Now, with Clint Curtis (Down Royale, Humality) having been formally announced as their new vocalist. the band are dropping their brand new single, accompanied by a visually stunning film clip, "Negative Gain".

"Negative Gain" was the next logical progression when it came to creating music for Hollow World. With Clint injecting new inspiration and a new vision into the band, they set out to create music that fit both his and the band's style. And what they came up with is a blistering track that seamlessly brings together their signature sound, now more matured and polished, with Clint's ferocious vocals.

"'Negative Gain' has been a truly collaborative process. The verse riff actually came to me when I was procrastinating just before our European Tour and became my soundcheck staple," explains guitarist Theo Goslett.

"Upon returning to Australia and taking up the writing efforts again, everyone was heavily involved and the track underwent many transformations before it became what you're hearing now and Clint was integral to the sound-design process. Not only did he handle all the synths, but he sent me a suggestion for some guitar parts that had me wishing I'd thought of those ideas myself. It's been seamless and effortless to have Clint become part of our creative effort and I think I speak for everyone when I say we're really excited about the things yet to come," continues Goslett.

The clip itself is the brainchild of Miki Simankevicius, whom Hollow World has entrusted to bring their visions to life over the years.

"While the video can be interpreted as you like, Negative Gain is about something many creatives, professionals, parents, workers, and all sorts of people can relate to: Impostor Syndrome - the feeling of being beyond your depth, unworthy of your achievements, or fear of being exposed as a fraud. After weeks trying to come up with a concept and considering if it would be feasible, I realised I was experiencing perfect example of this phenomenon - I still had no idea what I’m doing and now I’m in too deep to back out. The realisation of that feeling led to the development of the concept for this video as it stands," explains Simankevicius.

The song is a culmination of hard work from the talented musicians, and also a trial of sorts for Clint as they played shows and worked with him in the studio to write the new material, to make sure that every aspect fit before officially announcing him as their new frontman. This news really came as no surprise to their fans, for those who had seen him play with Hollow World had already adopted him as the new vocalist.

"First of all, I’d like to thank the Hollow World fans for making me feel so welcome over the last year during shows and tours. It’s no secret that I was more than likely the new singer, so this is more of a confirmation to the fans on what’s happening. It’s an honour to make it official and it’s very exciting to be moving forward," says Curtis of the decision.

"We have been working hard as a band over the last year on new material and progressing to another level artistically. What we have in store I’m sure will excite old fans, but bring in a lot of new fans too. Personally, I’m really looking forward to showing everybody what we’ve been brewing up. I can’t wait to get it all going!"