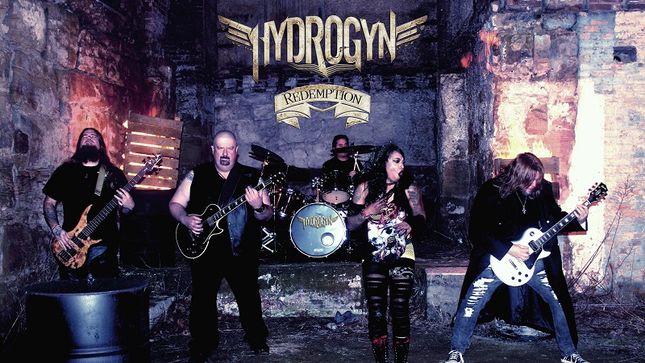 West Virginia rockers Hydrogyn has released their brand new video for “My Redemption”. The video represents the first single from their upcoming release Redemption due out March 10th on HighVolMusic.

The video was shot on location in Ironton, OH at the old historic Ironton City Jail. The city mayor gave permission to use the location as the film site. The jail is being torn down by the city but withheld from final destruction until filming was complete. The location was the perfect place to shoot with its dilapidated structure and surroundings that matched the dark and heavy vibe of the song.

Located in Ironton, Ohio, the building opened on September 22, 1892 on the site of a former market place at Railroad and North 4th streets.  Dedicated to the Grand Army of the Republic, the Women’s Relief Corps, American Expeditionary Forces and the Spanish-American War soldiers, the building housed a library and relics from the war and later the city hall and jail. It was abandoned in 1996.

Constructed for $20,000 by the Yost and Packard Architectural firm of Columbus to honor Civil War Veterans, the building was dedicated to the Grand Army of the Republic, the Women’s Relief Corps, American Expeditionary Forces and the Spanish-American War soldiers. The original deed from 1889 stated that the building could be used only for Union soldiers, their widows and orphans, and that it would contain a library and be a place for “relics of a patriotic nature.”

In 1905, a fire burned most of the structure that left only the front stone facade and tower, taking with it the Briggs Public Library.  Memorial Hall was soon rebuilt and used as a library. The building also suffered from the Ohio River floods of 1913 and 1933 but no major damage was reported. After the library moved out in the 1960s, the building housed the Ironton city jail and city hall until 1996, when a deteriorating roof, floor joist, and stairs led to its closure.

Hydrogyn signed with the label in November and not only includes Redemption but the entire back catalog for the band.

Founding member Jeff Westlake comments; "Signing with HighVolMusic is just a natural fit for Hydrogyn. Bill Chavis is where it all started with Bombshell in 2006 and so with Erica now on board it just seemed it was time to come home. So to do it right we did the entire catalog just to tighten the family up."