IAN GILLAN - "Anyone Can Write Songs; The Thing About DEEP PURPLE Was That It Was Always About Finding Something Exciting To Do" 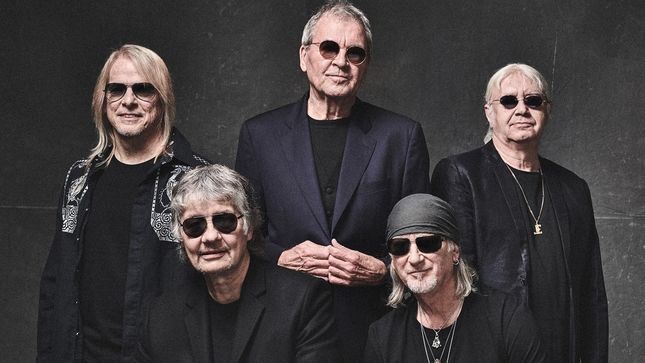 Classic Rock caught up with Deep Purple frontman Ian Gillan to discuss the band's new album, Whoosh! - their 21st record - and how the current global pandemic has affected the band. Following is an excerpt from the chat.

Q: When somebody suggests you make a new Deep Purple album, do you think: “Oh God, not again?”

Gillan: "No, no, no. Quite the reverse. We went through a time years ago when everyone seemed under the weather for whatever reason, then everyone felt a bit better and the energy came back, When that’s there, you’ve just got to find an outlet for it."

Q: Whoosh! is like the last two Purple records in that it sounds like a bunch of mates having a good time.

Q: You’ve talked about recent albums putting the "Deep" back into Deep Purple. It’s a great line, but what does it actually mean?

Gillan: "Deep is the opposite of shallow, and I think that’s what I was getting at. I think we lost the plot to a certain extent for a while, especially after (1984 comeback album) Perfect Strangers, because we’d not really followed the ethos of the band that was so successful. And that was to be brave and bold and write from the heart. A hint of commercialism crept into the band. Which is why I left in '73, anyway."

Q: Why did you lose the plot?

Gillan: "Ritchie (Blackmore / guitar) – brilliant, but he had an ear for a commercial tune. He had an ear for the more popular stuff. And it was very successful. But I thought it couldn’t survive, because it was planting itself in a fashion, and fashions come and fashions go. Once you’re out of fashion, you’re out of fashion. When it became focused on the more commercial elements, we started writing songs. Anyone can write songs. The thing about Purple was that it was always about finding something exciting to do. The diversity of the influences of the musicians – from orchestral compositions to big-band swing to blues, rock’n’roll, soul music – there was enough energy and music there for a lifetime."