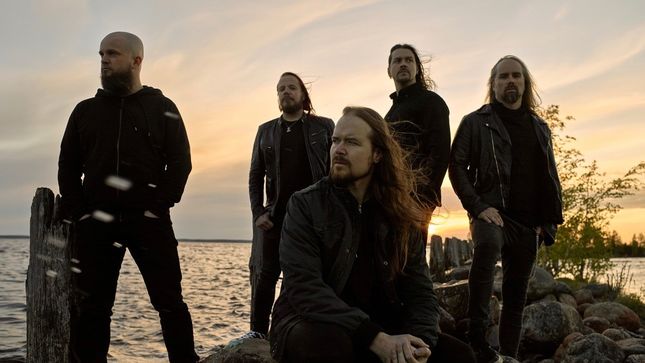 With the second single Finnish melodic death metal masters Insomnium are releasing the title track of their new masterpiece “Heart Like A Grave”, out October 4th, 2019. Watch the stunning video, filmed in the beautiful Finnish landscape of Koli national park, below.

The video was shot again by Vesa Ranta and Aapo Lahtela at Kaira Films, who filmed two videos in the same session with the band in the beginning of summer.

“‘Heart Like A Grave’ is the title track of our 8th album, woven of sorrow and longing. It is looking back towards the golden days of youth, when things seemed brighter, and there was still hope of better days. A theme so predominant in the Finnish lyrics throughout the ages.

“The music video was shot at the epic locations of Koli national park near our hometown Joensuu with directors Vesa Ranta and Aapo Lahtela and Kaira Films team. It continues the same story that began in Valediction video, so these two are bound together.”

Insomnium recently welcomed new guitarist Jani Liimatainen to join the band, stating: ”In 2018 it became apparent that Ville could not combine the heavy touring anymore with his another career as a lecturer in York university. Hence, we decided that a third guitarist was needed to get the machinery running properly. We did not have to look far, since Jani Liimatainen had already been a live guitarist on several tours. And since this dude is amazing musician, vocalist, songwriter and all-round nice guy the decision was really a no-brainer. Now we are stronger than ever!”

Ville comments: “Since 2010 I’ve been combining touring and band life with my science career. However, couple of years ago it became clear that it has become impossible for me to put my 100% in both. This is partly because of more demanding role at the University of York but also because Insomnium has been growing steadily year by year leading to increasing amount of touring with every album. With Jani on board, we have secured a steady live line-up to keep delivering fierce live shows all around the world with me joining the band when time allows.”

Jani adds: “It is a great honour to join such an amazing band. I had already been touring with the guys on and off since 2015, filling in for Ville whenever needed, so when they asked me to officially join the band the answer was pretty much a no-brainer. I am looking forward to sharing many more metal moments with these guys who I am proud to call my friends.”