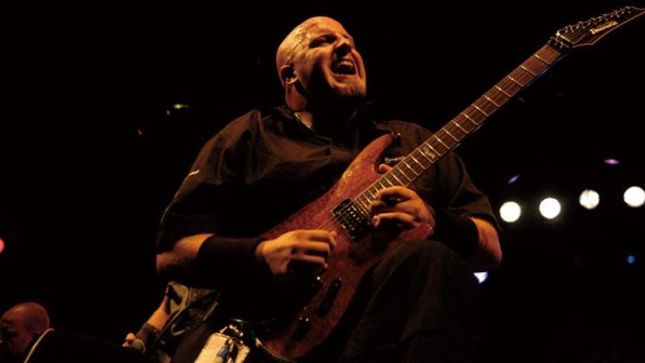 Into Eternity guitarist / founder Tim Roth has checked in with the following update:

"We got asked to play this song at a festival in 2020, so I’m learning it today. All the clean vocals were a duet between my buddy Stu (Block) and I. We made sure Stu sang as high as possible. At times it’s an octave above my high chest vocal. Thanks to Andy Sneap (Judas Priest) for mixing it. Lots of cool riffs in this one, it’s an arm breaker."

In a recent interview with the Regina Leader Post, Roth promised fans won’t have to wait another 10 years for the follow-up to 2018’s The Sirens.

But “it’s all happening as we speak right now. We have so many songs and so many riffs, so many lyrics — pages and pages of lyrics. So really, it’s a matter of getting the band together.”

His band has not found superstardom, but “I think everything worked out just perfect,” said Roth.

“I would never say, ‘Well, hey, we should be bigger’ or anything. We have fans all over the world that just are so passionate.”

It’s an honour to connect with people through their music, he said.

“(People who were) on the edge of suicide said that our music has somehow helped them and that is just really shocking to hear, like these heartfelt messages. And also just musicians saying how much of an influence we were to them and how we were their first show.”

It's been 10 years since Into Eternity unleashed 2008's The Incurable Tragedy on Century Media with former vocalist Stu Block, now of Iced Earth. A decade later, it's a new era for the band with their new album The Sirens, which features founding member and guitarist Tim Roth with a new lineup that includes: vocalist Amanda Keirnan (The Order Of Chaos), guitarist Matt Cuthberston (Untimely Demise), bassist Troy Bleich (Planet Eater) and drummer Bryan James Newsbury (Culled).