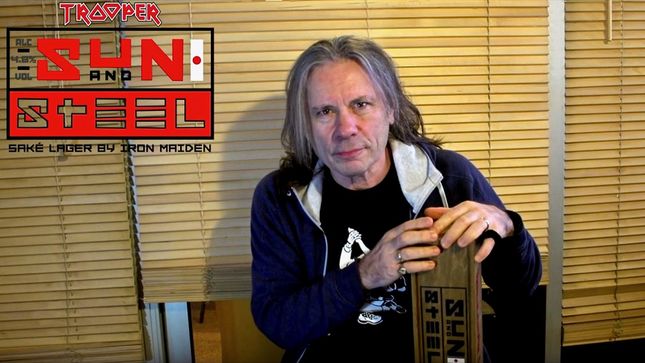 Sun And Steel is now arriving at selected Morrisons across the UK. Check the stockist finder at ironmaidenbeer.com, and if it's not on shelves in your store yet, keep you eyes peeled over the next couple of days. First Morrisons... then the world!

Bruce Dickinson unveils Sun And Steel in this new video:

Sun And Steel is the first lager in the Trooper range and is one of the most complex beers that Robinsons Brewery have ever produced; a double fermented lager created with authentic Japanese saké yeast.

The idea for the beer, designed once again by Iron Maiden vocalist and beer aficionado Bruce Dickinson along with Robinsons’ Head Brewer Martyn Weeks, was first conceived during the Autumn of 2016 following a meeting between Bruce and friend of the band and long-time Iron Maiden fan George Yusa, owner of the 300 year old, family run Okunomatsu Saké Brewery in Fukushima. Bruce became intrigued with the idea of putting the two flavour profiles together and thus Sun And Steel was born.

George was able to deliver a sample of the saké yeast to Iron Maiden’s 2017 concert at London’s O2 Arena, which Bruce took up to Robinsons Brewery. Having obtained permission from the Japanese government to brew with it, Martyn and the team have been carefully cultivating the strain ever since.

Bruce Dickinson commented, “This has been such an exciting project. I had a crazy idea to try and make a sake infused lager and over two and a half years later, here we are! I know Martyn and the team at Robinsons have had to become mad scientists to make this work but the end result is a really unique hybrid beer that tastes fantastic. Trooper fans have been asking for a lager, and here it is. I bet you would never have guessed we would do it like this though!” 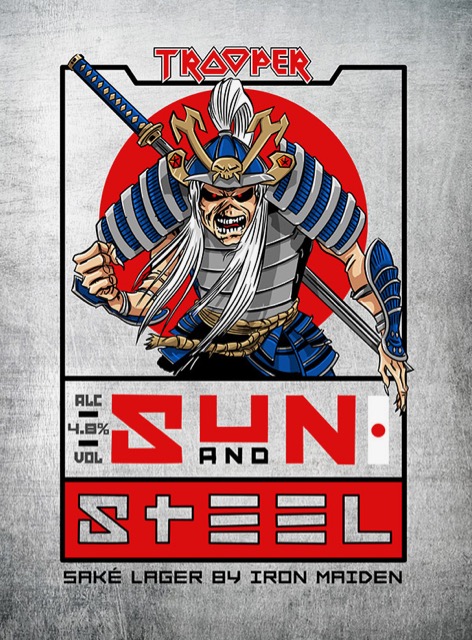 Sun And Steel takes its name from the Iron Maiden song of the same name that appears on their 1983 Piece Of Mind album, which was in turn inspired by the life of Japanese Samurai Miyamoto Musashi.

Sun And Steel is a hybrid beer because it’s made with two yeasts. A lager yeast for the initial fermentation followed by a saké yeast for a second fermentation. The result? A delicate, subtle fruit flavour infused into a pilsner style lager.