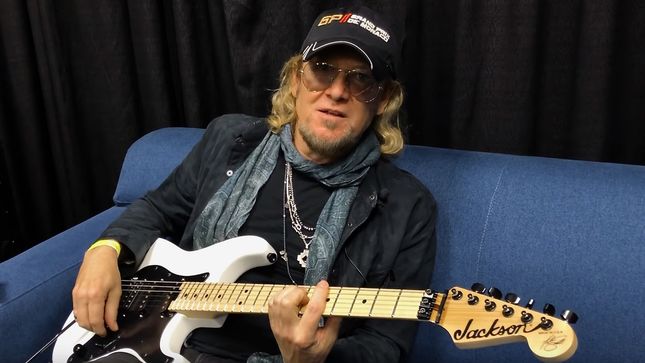 In this new video from Jackson Guitars, Iron Maiden guitarist Adrian Smith reveals the first song he learned to play on guitar was "Silver Machine" by Hawkwind. Find out who taught him how to play the song below:

This brings the count of Trooper beers to eight. These two new additions are available for pre-order via the official Robinson Brewery website here. Details on availability in stores will be revealed soon.

Trooper IPA was inspired by American IPAs sampled by Bruce at the Craft Brewers Conference in Denver, USA in 2019, where he was keynote speaker.

Bruce Dickinson commented: “I’ve sampled so many different styles of beer around the world on my travels with Maiden and it’s hard to ignore how big IPA has become, and what an exciting style it can be. I’m a huge fan of both IPA and Stout and they were the gaping holes in the Trooper range. I’ve lost count of the number of people who have asked us to do a Fear of the Dark Stout over the last few years!”

Trooper Fear of the Dark has been created, providing the first stout of the Trooper range.

Brand manager Sam Kennerley said: "Fear of the Dark is something fans have been begging for since Trooper was first released and we’re proud to finally be rewarding their loyalty. Trooper Red ‘N’ Black porter was one of our most popular releases so we knew there was a demand for new darker beers and we are glad to be finally releasing a sessionable stout for all our fans to enjoy.”

Ten Robinsons’ beers were recognized amongst the best beers in the world at the 2019 Global Beer Masters, where beers were blind judged purely on taste by the finest palates in the world; a panel of beer experts, sommeliers and senior buyers. Beardo, Hopnik Citra IPA, Old Tom, Mojo, One Eye’d Jack, and Trooper (brewed in collaboration with Iron Maiden) all received Bronze medals while Unicorn Copper Ale (first brewed in 1896), Kettlehead Choc Stout, Light Brigade (brewed with Iron Maiden and Help for Heroes), and Mashout Pale Ale all scooped silver.

Martyn Weeks, Head Brewer for Robinsons, said: “We work hard to make sure our beers are as diverse as our customers. Whether visiting a pub or shopping at a supermarket, there’s a Robinsons beer for everyone and every occasion. From original recipe heritage brews that are more than 120 years old to spirited young beers that are new to the market, they all have one thing in common: quality. It’s a simple formula which has earned Robinsons real ale recognition for almost 180 years.”

Adding to the 2019 trophy cabinet, Robinsons’ Old Tom and Trooper beer won prestigious awards in the 2019 International Beer Challenge, with Old Tom receiving bronze in the New World-Style Barley Wine category (7.5% and up), and Trooper silver in British-Style Pale Ales and Bitters (4.1-5%).

Old Tom also lapped up Gold at the 2019 BBI Awards in the class of Stout, Porter or Dark Ale ABV 7.5% or above while Hopnik Citra IPA received a Diploma from the British Bottlers Institute in the IPA ABV 4.0% – 5.4% class, with both beers credited for their exceptional design and beer quality.

Finally, Robinsons picked up 2 gongs at the Great Taste Awards 2019; the world’s most coveted food and drink awards. Out of nearly 13,000 products from over 100 different countries, Old Tom was awarded the prestigious 3-star Great Taste awardafter leaving “the judges speechless when they tasted it”, while it’s little brother Ginger Tom was highly praised for its “craftmanship” and received the impressive 2-star Great Taste award.

To celebrate each of the iconic Iron Maiden studio albums, Trooper and Robinsons Brewery have launched exclusive collector bottle caps. Appearing on all Trooper beer from October 2019, including limited edition Halloween inspired Day Of The Dead bottles, the unique bottle caps commemorate every record from Iron Maiden’s self-titled album, released in 1980 until 2015’s award-winning and #1 album, The Book Of Souls.

Around for a limited time only, two million of the collectable bottle caps were made available globally wherever Trooper beer in bottle is sold - but fans had to be quick off the mark, as some cap designs were more difficult to find than others.

Collectors can buy an exclusive collector frame from Robinson’s Brewery to showcase their bottle caps. The launch of the limited edition bottle caps coincide with Iron Maiden’s ongoing Legacy Of The Beast Tour and the recently released studio collection.