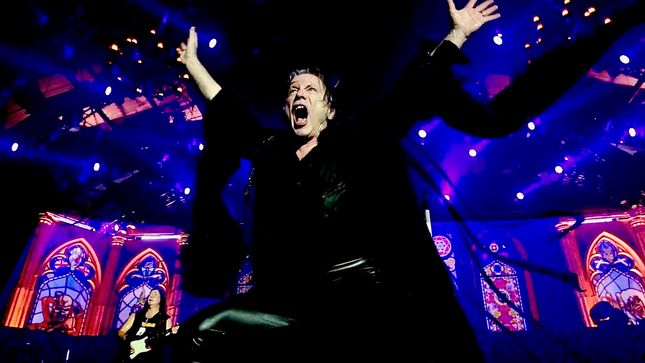 Talking about his worries with the disease, Dickinson said, “"The worrying thing was the 'alive' thing. The voice thing was actually, I actually genuinely wasn't bothered. I was just, like, 'You know what? I'll just settle for being alive and then we'll see what comes out.' But the guy who did the all the treatment for it was really cool. With all the radiation and stuff that I had, he said, 'Look, I'm gonna actually miss your larynx,' he said, 'so that bit of it should be absolutely fine.' And, actually, by the time they kind of cleaned out the pipes, 'cause I had a lump that was the size of a golf ball in the base of my tongue, well, that's gone. I mean, no surgery or anything. And I thought when that went, suddenly all this air is getting to places that it used to get to when I was, like, 25. So I'm thinking, 'Hey, wow! The high notes, oh my God! They're back properly.'"

Iron Maiden will continue their Legacy Of The Beast Tour into 2020 heading to Australia, New Zealand, Japan and a first ever visit to The Philippines. This will be followed by shows in Israel and Dubai before circling back into Europe for a final run which will be mainly festival and headline stadium dates, plus some arena shows, and will include countries and cities not visited on previous legs.

So far, the band has played to close to two million fans in 39 countries around the globe since the tour opened in 2018, including headlining to a capacity crowd of 100,000 at the legendary Rock In Rio festival in Brazil.

Bruce Dickinson says, “We’ve had a fantastic time on the Legacy tour so far, and the reaction everywhere to the stage show and all the crazy props (and Eddie!) I get to play with has been phenomenal. The whole band has been having such fun we’re really excited to bring this production to Australia, New Zealand, Japan, The Philippines, Israel and Dubai and to come back to Europe and reach even more of our fans there.”