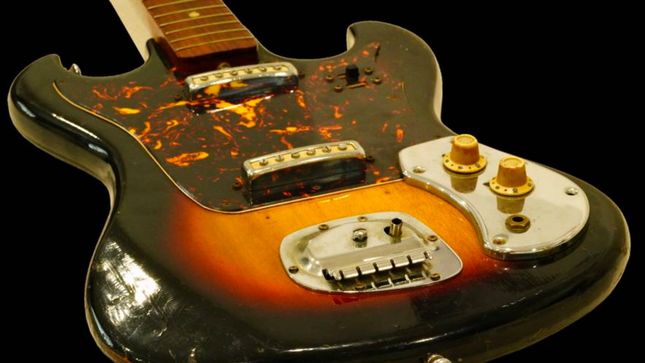 GWS Auctions have listed Jimi Hendrix's early 1960s Japanese Sunburst electric guitar, with letter and video from Leon Hendrix. The auction is set to commence on August 8. The minimum bid is set at $50,000.00.

This early 1960s Japanese sunburst electric guitar was played by the legendary guitarist and rock n' roll musician, Jimi Hendrix. According to an interview with Jimi's brother Leon Hendrix, with whom Jimi was like a best friend, this guitar was used by Jimi shortly after he returned home from the U.S. Army in 1962. After leaving Fort Campbell Jimi moved to Clarksville, Tennessee for a short time where he played on the Chitlin' Circuit with the likes of Wilson Pickett, Slim Harpo, Sam Cooke, Ike and Tina Turner and Jackie Wilson before moving to Harlem, New York in early 1964 where he stayed until late 1966 playing venues such as Cafe Wha and the Cheetah Club.

In his interview, Leon recalled fond memories and stated that he would talk to his brother and said that it was "during this time that was the last time that Jimi really sounded happy." Mr. Hendrix also stated, "I remember Jimi calling me from New York saying he so broke he can't even pay attention. He pawned his guitar and his friends got him one."

The guitar appears to be in well-loved condition and has no strings as we wanted to keep it in its original state. Jimi moved to London in late 1966 and left this guitar in New York at the apartment of one of his best friends, where Leon recalled seeing it many years later. The guitar will come with a letter of provenance from Leon Hendrix along with a copy of the video interview. He is also willing to have a private lunch with the winning bidder, at the winning bidder's expense if they do desire.

The guitar was previously listed in a Christie's auction and will come with the auction lot tags. The lot will also include a notarized letter from Jimi Hendrix's New York friend with whom he left this guitar, along with a statement from the collector who our client acquired it from who spoke with the Hendrix's friend before he passed. We have never seen provenance this thorough on an asset as historically significant. The documentation is incredible.

Further details and more information can be found here.