JOE SATRIANI Guests On Jonesy's Jukebox; Talks New Album And Looks Back On Surfing With The Alien (Video) 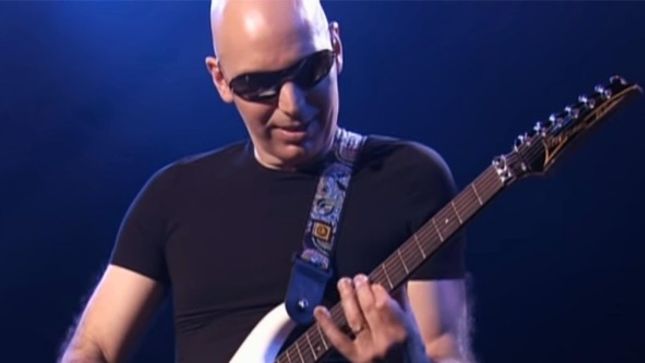 Guitar legend Joe Satriani recently guested on Jonesy's Jukebox - aired by 95.5 KLOS - and discussed his new album, Shapeshifting, the Coronavirus pandemic, alien conspiracy theories, and what it's like to record music without any lyrics or singing. Check out the interview below.

Satriani: "The only reason why that record is called Surfing With the Alien is because I did an early interview with a British journalist who got a pre-release copy of the record, and he said, 'I love the record, but I hate the title,' which was Lords of Karma. And he had this thing about guitar players; he said, 'How come when guitar players put out these records, they suddenly get all mystical and everything?' And I wasn't able to explain to him the meaning behind Lords of Karma.

So I called the record company and said, 'Hey, have we actually manufactured the record?', and they said, 'No, we're going in, like, three weeks from now.' I told them the story, 'Let's change the title.'"And on the phone, we just went over the 10 tracks, and I got to 'Surfing With the Alien' and I said, 'You know, no one's gonna take that seriously, they'll know I have a sense of humor - I'm just kidding. So let's just make that the title.'"

Joe Satriani’s new studio album, Shapeshifting, is set for release on April 10 via Sony Music/Legacy Recordings. Part 2 of a 3-part series, Inside Shapeshifting, is now available. Two segments can be seen below: