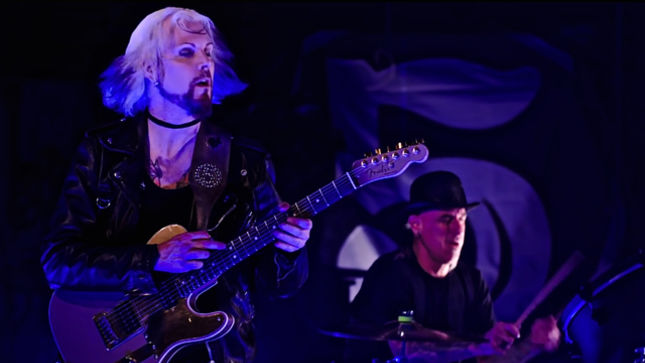 In a new interview with Robert Cavuoto for MyGlobalMind.com, guitarist John 5 discusses his upcoming album and tours, and working with Ace Frehley and David Lee Roth. An excerpt follows:

Q: You play on Ace Frehley’s new CD, what songs did you play and how did the opportunity come about?

John 5: “I have known the KISS guys for most of my adult life and really close to Peter Criss. He is one of my great friends. I have known Ace for ever too. Ace called me up and said, ‘Would you come and play on my record?’ I said, ‘Of course!’ He gave me a bunch of songs to learn then texted me a few days later and said we are going to do “Parasite”. I was like ‘YES, how rad is that, to play “Parasite” with Ace!’ I also played “Bad Castle Magic” – one of Hendrix’s songs. I love spending time with Ace, he such a great guy and super cool. We get along really well.”

Q: Did you play “Parasite” true to the original or did you change it up a bit?

John 5: “”Here is what happened, we are playing the song and I started improvising. Then Ace said, ‘I’ll improvise after you.’ I then said ‘why don’t you just play the solo as is as it’s such a memorable piece of music?’ He played it exactly how it was created in one take. Fans will love this version.”

Earlier this month, John 5 released the second of a total of three new videos and digital singles. The new track is entitled "Behind The Nut Love”. The full single artwork, designed by Piggy D, can be seen below:

Originally recorded in in 2005, today’s version features Ian Ross and Rodger Carter, collectively known as John 5 And The Creatures. The new version will appear on the upcoming album, Guitars, T!ts, And Monsters. A video for the track can be seen below:

Also announced are revised dates for his upcoming spring tour John 5’s Behind the Nut Love with the Creatures Tour beginning in March. The tour will start in Westland, MI and conclude in Londonderry, NH with a total of 16 live shows. Tickets are available now on john-5.com.

John 5’s Behind the Nut Love with the Creatures Tour dates:

John 5 has had an illustrious career collaborating with chart topping artists such as: Lynyrd Skynyrd, Ricky Martin, and Rod Stewart. John has performed on critically acclaimed world tours with Marilyn Manson and Rob Zombie. Later, John ventured into the world of film score composing for Rob Zombie’s The Lords of Salem and 31. In 2004 he branched out into a successful solo career and has since released eight studio albums.