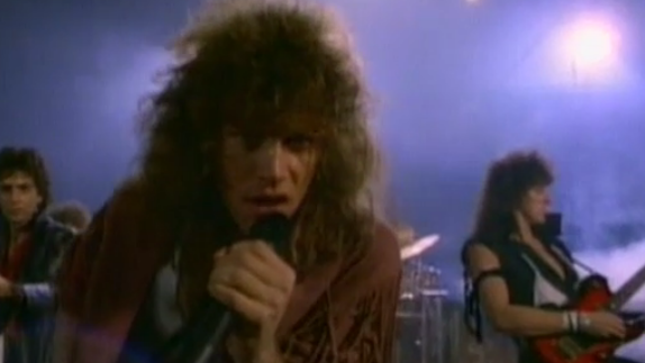 Bon Jovi frontman Jon Bon Jovi recently spoke with Ray Waddell at Billboard.com about the video for the band's first hit, "Runaway". The single was taken from the Bon Jovi self-titled debut, released in 1984.

“It’s absolutely awful,” says frontman Jon Bon Jovi, 52, who’s now able to laugh at the awkward performance footage of his band interspersed with shots of a young girl with a thousand-yard stare shooting fire from her eyes -- an homage to the Stephen King novel-turned-film Firestarter. “We had no input as to what it would be about or who would be in it. They had people give us clothes to wear; we were just dumbfounded,” he says. “Fortunately, the song had some roots, so we were saved.”

The video aside, “Runaway” helped vault the young band into the major league. “I used to dream about the day when Casey Kasem would talk about us on American Top 40,” says Bon Jovi, who was 21 at the time. “And there it was, on Sunday morning, hearing that voice, ‘No. 39, a brand-new band from New Jersey.’ I was just so happy.”

"The first concert I ever saw was Bon Jovi at the Meadowlands in 1987. I was 10. For this reason, the band will always be dear to me. Recently, I had the pleasure of interviewing Bon Jovi's official photographer, David Bergman, on his new (and very intimate) book on the band, Bon Jovi: WORK. I know some of you are Bon Jovi fans. Check out the story and indulge in your guilty pleasure."

Music has always been a major part of Bergman's life. A Berklee School of Music veteran, he eventually sold his drums to buy camera lenses and began his professional career in the early '90s at the Miami Herald. An assignment covering Gloria Estefan on the road made him realize his passion for immortalizing live music performances. After stints on tour with the likes of Barenaked Ladies, Avril Lavigne and Sarah McLachlan, he set his sights on getting the definitive tour photographer gig.

“I went after Bon Jovi pretty hard,” he recalls. “It took me a couple of years; it really is not easy to get into that inner circle. Eventually, I was able to get a meeting with the right person. They let me shoot a couple of gigs in the beginning, and I would just do a handful of shows. Over the course of early 2010 and into that summer and by the fall for sure, they put me on a tour bus and I became the official tour photographer. By the end of the year and into 2011, Jon got to know me and my work really well and wanted me really embedded with the band. I was doing so much of the behind-the-scenes stuff that it made logistical sense at that point to bring me into the inner inner circle. The next thing I know, I'm traveling on the private plane with the band every day instead of on the tour buses with the crew...It was just a slow and steady progression, and I always kind of had my eye on the prize and eventually got there.”

WORK is a rare, behind-the-scenes look at Bon Jovi, the top touring rock band in the world. This oversized, hardcover art book — weighing nearly five pounds — is a collection of color and black and white photographs taken by the band's official tour photographer David Bergman during two record-breaking world tours from 2010-2013. Exclusive, intimate, and powerful images of Jon, Richie, David, and Tico show the band members on stage, backstage, and inside their own homes.  Another section of the book features private photographs personally taken by Jon, giving fans a unique look — for the first time ever — at the rock icon's life through his own eyes.