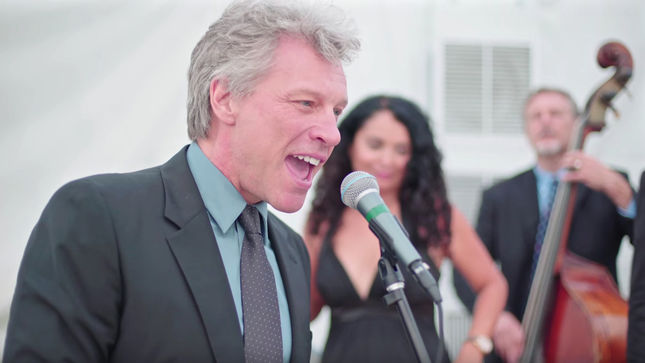 abcNEWS reports that Jon Bon Jovi was a reluctant singer at a Florida wedding last weekend.

Video (below) shows the rocker sheepishly taking the microphone after a wedding band led by singer Lourdes Valentin launched into Bon Jovi's 1986 classic, "Livin' On A Prayer."

Valentin tells The Associated Press she knew Bon Jovi would be a guest at the wedding and she prepared the song specifically for him. She says he told her he didn't think he wanted to sing before the party and she was "very surprised" when he decided to "grace us with his talent."

Check out the video below, courtesy of coolcoconutstudios.com:

Bon Jovi have completed work on their upcoming 14th studio album, expected this fall. The band posted the photo below via social media with the simple tag, “The album is done!”

The new album, tentatively titled This House Is Not For Sale, will be released via the band’s label, Island Def Jam Music Group. Details on the upcoming release are expected to be revealed soon. Stay tuned.

The new album marks the first Bon Jovi album with no input from guitarist Richie Sambora, who left the band in 2013. The band’s previous release, Burning Bridges, included mostly older songs, including a co-write from Sambora.