K.K. DOWNING - "The Next Few Months Are Going To Be Very Important For Me," Says Former JUDAS PRIEST Guitarist 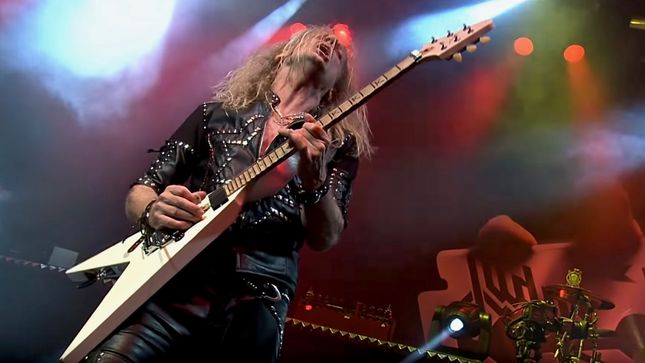 K.K. Downing spoke at length to eonmusic, about his recent appearance at Bloodstock Open Air, Judas Priest's pending 50th anniversary, and about what the future holds for him.

In the exclusive chat, K.K. revealed that he was nervous about stepping back on stage again. Said the guitarist: "It was pretty daunting really. It was like I parachuted in or something... What’s that? Bungee jumping! It’s a bit like that, really. I was okay when I landed, you know?!"

Downing also spoke about the rehearsals, song choice, and the challenges of playing with another band, admitting, "I’d never met the guys, and you can make a very good plan over the telephone, but getting together, meeting for the first time, plugging into the amp and playing those songs; you don't know what’s going to happen? But it was great, and I was absolutely delighted."

About Judas Priest's 50th anniversary next year, Ken said; "Lots of things could happen, but I think the main thing is, lots of people are saying to me; 'Will you be included? Are the band talking to you about the 50th anniversary?', because obviously, it’s a pivotal point, that anniversary. I mean, I was there fifty years ago; Al Atkins was the singer fifty years ago; Ian was there, and so; 'Are you going to be included?' Well the answer is; I don’t know. It’s the other guys that need to be asked as it's obviously their decision. Many people are asking me what might happen, when only those guys can say, but people do want to know."

Speaking about what the future holds, Ken said that the possibility of playing with bands that come through his club - KK's Steel Mill in Wolverhampton - was now a possibility. "It has been talked about, but the only reason I haven’t before is because I think that people have just dropped it on me. I’m probably not that confident a guy that I can just jump up. But I think I’d be quite delighted to be able to do that. Like I say, I’m the host of the venue, and it would be quite fitting, really."

Finally, K.K. added; "I think chapters are still unfolding in real life for me, and I think the next few months are going to be very important for me."