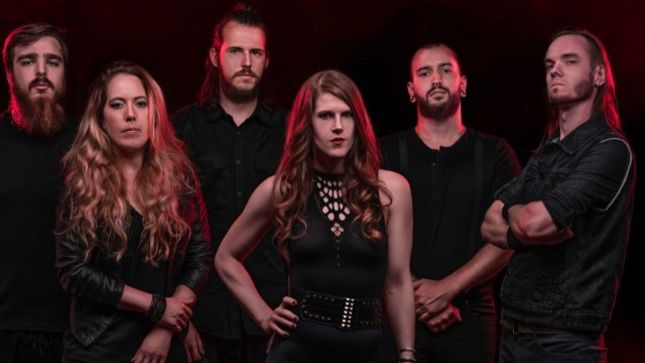 Karkaos has taken their mastery of the Quebec metal scene to the next level with the addition of new vocalist, Morgan Lander of Kittie. The band is coming back more fierce and focused than ever, ushering in a devastating new era of power, presence and brutality. On September 21st they hit the stage at Théatre Fairmont in Montréal, Quebec with Lander leading the charge. Fan-filmed video is available below.

Lander is thrilled to be brought into the fold. "Joining Karkaos has been a true honour for me. It feels so incredibly good to be back in the metal game after a number of years away, and I cannot wait to step on the stage once again with these amazing musicians."

The rest of the band feels the same. “We already knew how talented Morgan was when we began talking to her about joining the band,” says band founder, Vincent Harnois. “When she sent us her first demos, we realized that this was going to be something extremely special. She is an absolute pleasure to work with and she brings a whole new dimension to our songs. It is an honor to have her with us and we are thrilled to start the next chapter or our band together.”

Forged out of the ashes of a much earlier band incarnation by Harnois in 2003, Karkaos has quickly evolved into one of the most respected and celebrated metal acts from Montreal, Canada. Mixing elements of death metal, power metal and hard rock, this female-fronted band succeeds in bridging the gap between extreme darkness and light, beauty and terror. Karkaos has performed alongside international acts such as Into Eternity, Enslaved, The Agonist, UneXpect, Unleash the Archers, Delain and Leaves Eyes. The band is brutally punishing audiences with an incredible live show, enabling them to establish a strong following both locally and abroad within a few short years.

The band released their first EP, entitled In Burning Skies, in 2010, closely followed by a professionally shot music video and a live appearance on Montreal’s prestigious music television station Musique Plus. Striking while the iron was hot, the band returned to the studio to record their critically acclaimed debut full-length album Empire, in 2013, led by the single and subsequent music video for “Depths Of Madness”. After years of crafting their live show and refining their sound, once again Karkaos managed to come back stronger and more accomplished than ever with the release of their second full length album, Children Of The Void, in 2017, a testament to their work ethic and strength as a band, diversifying their sound with the addition of the immensely talented and seasoned drummer Justine Ethier (Blackguard, Sykode).

Karkaos is ready to push the boundaries of extreme melodic metal with their upcoming follow up to Children Of The Void. The band entered Silverwings studio in September to demo and work on pre-production on eight new songs, looking to record the full length this fall/winter.