KISS Frontman PAUL STANLEY On End Of The Road Tour - "This Is Absolutely, By Far, The Greatest Show We've Ever Done" 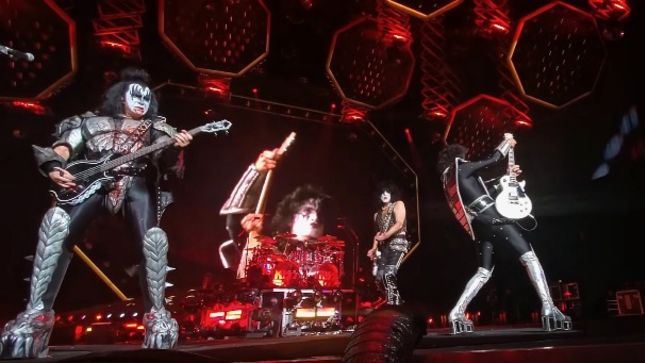 The Sydney Morning Herald caught up with KISS frontman Paul Stanley to discuss the band's current End Of The Road farewell tour and take a look back on KISS' colourful history. An excerpt is available below.

On being influenced by Humble Pie's Steve Marriott:

Stanley: "The idea of being on stage and preaching the gospel of rock'n'roll, which is basically what he was doing ... that was something I aspired to. As a child, a young child, I saw a lot of the early rock'n'roll and I was fascinated by rock'n'roll, so it started quite early. I was hugely influenced by the Beatles and Led Zeppelin. I was fortunate enough to grow up in New York, where on any given weekend in the late '60s or early '70s you could see The Who, you could see Humble Pie, Zeppelin or Jimi Hendrix and that really, really inspired me; these bands who took pride in what they were doing, they left it all on the stage, so to speak."

On the End Of The Road tour:

Stanley: "We're just having a ball, the chemistry on stage is incredible, we're having a ball off stage too; we've never had more fun and there's so much to celebrate. The band is on a high because we're just doing the ultimate KISS show and that in itself is a cause of incredible pride. I have to say we've raised the bar. This is absolutely, by far, the greatest show we've ever done."

KISS performed the Hotter Than Hell album track, "Let Me Go, Rock 'N' Roll" during their End Of The Road tour stop on August 11 at Jiffy Lube Live in Bristow, Virginia. Watch pro-shot footage below: