KISS Frontman PAUL STANLEY - "The First Time We Did A Farewell Tour, It Was Ill-Conceived" 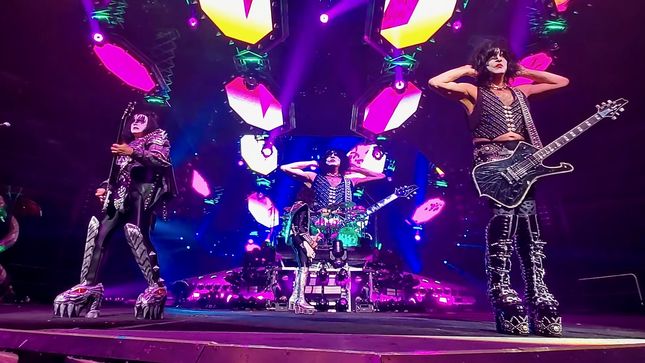 KISS frontman Paul Stanley is featured in a new interview with C-Ville discussing the band's ongoing End Of The Road tour. An excerpt follows.

C-Ville: This is your last tour. What song will you be happy to never play again?

Paul Stanley: "I’m thrilled with every song we play. My point of view is, if you’re tired of playing a song, it’s probably not a good song. Some of these songs come from 45 years ago, or even longer, and they’ve stood the test of time because they’re that good. And for me to not give them the respect that they deserve, would be me being undeserving of those songs. I’m thrilled to play 'Rock & Roll All Nite'. I’m thrilled to play 'Love Gun'. I’m thrilled to play 'God of Thunder', 'Detroit Rock City', and on and on and on. So, those songs are rallying cries for us and our audience. Our connection to our audience is so strong because we never lose sight of wanting to please them. And on this final tour, this is the ultimate KISS show. It’s bombastic. It’s over two hours of all the songs you want to hear. It’s a unique opportunity to know that this is the last time. Many times in life, we all find ourselves losing someone, or losing something, and saying, 'If I had only known, I would have done something different.' Well, instead of going out with a whimper, we’re going out with a bang! And this is a victory lap where we all get together—because it’s like a congregation of everyone cheering for what we’ve accomplished. And by 'we,' I mean us and the fans."

C-Ville: KISS did a farewell tour 20 years ago. Why should we believe you this time?

Paul Stanley: "Well, because the writing’s on the wall: We’re 20 years older, for starters. And secondly, the first time we did a farewell tour, it was ill-conceived. The idea that we should let two members who were making us—meaning Gene and I—miserable, and compromising the band, shouldn’t be a reason for calling it quits. We have always believed that the band is bigger and stronger than any individual members, and we suddenly got caught up in the idea of putting the horse down instead of just getting rid of a couple of the jockeys."

KISS kicked off the North American leg of their End Of The Road farewell tour on February 1 in Manchester, New Hampshire. The band have released some new pro-shot footage from the tour. Watch three clips below:

Dates for the tour, which features David Lee Roth as direct support, can be found here.