KISS Guitarist TOMMY THAYER On ACE FREHLEY - "As Far As The Jabs And All That, He Can Say That Stuff And I'm Not Going To Say Anything Bad About Him" 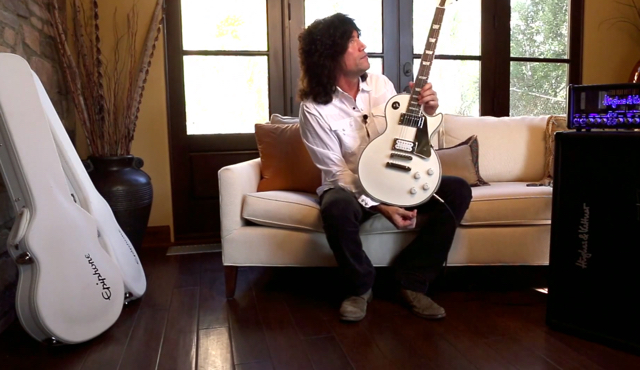 Australian publication The Herald recently caught up with KISS guitarist Tommy Thayer in anticipation of the band's tour down under later this year. An excerpt from the story is available below:

Thayer first performed with the band in 2002 when he was on stand-by to fill in for original guitarist Ace Frehley who had returned to the band after first splitting in 1982 and rejoined for the reunion tour in 1996.

Frehley would often turn up late to go on stage - or not turn up at all.

His unreliability had become so common that Thayer had his own "Spaceman" outfit - the one worn by Frehley - ready to go backstage in the event that the guitarist would fail to show up.

In 2002, KISS was booked to play a private show in Jamaica. Frehley refused to play, so Thayer got the call that he was needed.

"Doc McGhee, the band's manager, had called me and said 'The other guy's not gonna show up for this gig, we know that now for sure, so we want you to make sure to be ready to play and come down and don the make-up, put the Spaceman outfit on and do this gig'," Thayer recalls.

"So the first gig was really as a fill-in. We didn't know where everything was going at that point but then, by the time we got to the beginning of 2003, I was officially in the band.

"They said 'We want you to do this' and so it was as simple as that."

Thayer is aware of Frehley's comments.

"I don't want to get into a back and forth but I'm sure you can kind of assess what you think when you hear all that," Thayer says. "I think he had every opportunity in the world to continue in KISS and be in KISS as long as he did the right thing, but it worked out better for me and he has to lead his life.

"As far as the jabs and all that, he can say that stuff and I'm not going to say anything bad about him. I just wish all the best to everybody in whatever they're doing."