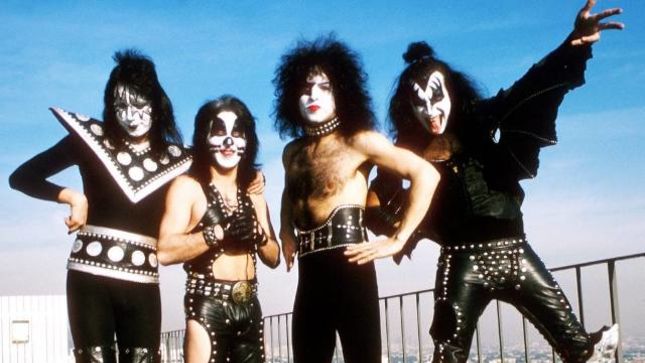 Featured on the latest episode of the 80's Glam Metalcast are three segments. First they talk about KISS Meets The Phantom Of The Park, analyzing an interview with Michael Bell, the voice actor who replaced Peter Criss' voice in the movie. Then Plasmatics guitarist Wesley Beech tells them about working with Gene Simmons as a producer for the Wendy O. Williams solo album. Finally, they ponder the story that KISS wore Love Gun costumes on the first night of the Creatures tour. Check it out below.

"Gene was getting into producing. We really liked Wendy's style and wanted to produce her. He came into the picture (for the W.O.W. album) and wanted to replace the whole band! Wendy was pretty adamant about having me in her band. Our bassist had a disagreement with management and he ended up leaving before we started the recording. Then Gene ending up playing bass on the album. It was a different approach. We had worked with Dieter Dirks (Scorpions, Accept) last time and he used a really tight fisted approach to recording. He whipped us into shape. Gene came in and was more laid back. He brought in a bunch of songs for us to try out. He was going for a more commercial approach for Wendy and it came out really good. We recorded the songs again that Gene brought, we didn't use KISS' demos. The reason people think that is because there are bootlegs floating around listed as KISS w/Gene singing 'It's My Life'. It's actually Gene singing over our backing track as a guide for Wendy to work on the vocals. If you listen to those bootlegs...it's her track."