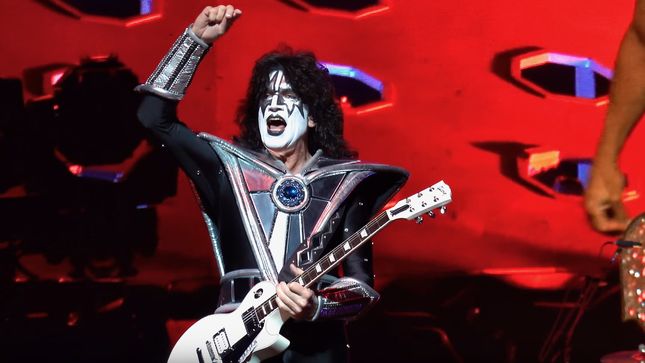 In a new interview with Sweden's RockSverige.se, KISS guitarist Tommy Thayer discusses a number of topics, including the upcoming KISS documentary, a KISS biopic, deluxe editions of classic KISS albums, the long-awaited KISSology Vol. 4 DVD, and more. An excerpt follows:

Rock Sverige: The KISS documentary, what's the status on that?

Tommy Thayer: "That's a good question. I think we're at least halfway into it. The director is John Dorsey and he's done great things before. We've done interviews on camera and he's putting together a lot of historic footage and talking to a lot of different sources, including us and our archives. It's coming along. I've seen a little bit and I think it will be really exciting and really well done."

Rock Sverige: Are you still looking at a fall release?

Rock Sverige: And fans have contributed to it?

Tommy Thayer: "I know that for a fact. I know some guys that are big collectors and there's this guy called Mark Cicchini, he's one of the “Three Sides Of The Coin” podcast guys and he's not only contributed material, but he also pointed John Dorsey in a lot of good directions as far as making contact with a lot of fans. We have a lot of great stuff in our archives for certain, but there's still a lot of other unique and rare stuff out there that we don't have. It's a matter of sourcing that stuff."

Rock Sverige: About the biopic then? Is there a script yet or anything like that?

Tommy Thayer: "I think they've been working on it. I know less about that to be honest with you. I know that it's in the works, but I don't think they've started filming anything yet, but there's definitely a lot of planning and that's about as much as I know."

Rock Sverige: Deluxe versions of KISS albums then? I know you've mentioned Creatures Of The Night (1982) before and that you couldn't really find any material. Metallica have done some amazing box sets. Do you know if there are any thoughts about doing anything like that in any way?

Tommy Thayer: "Well, all that kind of stuff is always on the table. We did the Love Gun (1977) deluxe edition and we were talking about Creatures Of The Night. Sometimes it's hard to find all the bits of information you hope to have, but there's always going to be more things like that because there's a demand for it obviously, like with yourself and the true fans want to see all that stuff, so we keep working on it. As well as KISSology 4, which has been in the works too and there's a lot put together and hopefully when the time is right we'll put that out too. It's just that there's so much other stuff going on all the time, so it's difficult to do everything at once."

Read the complete interview at RockSverige.se.