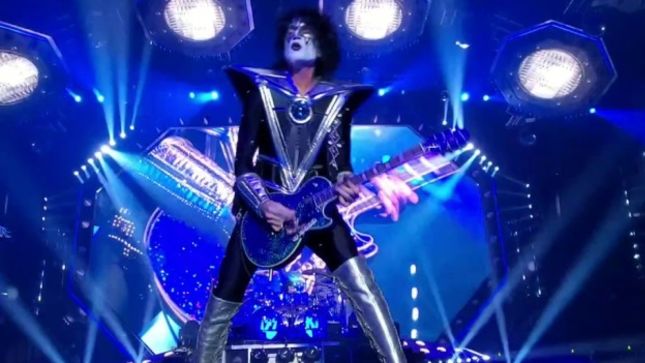 In the clip below, Tommy Thayer of KISS sits down with Three Sides Of The Coin host Tommy Sommers in this tell-all night of life, laughs, and legends. It was filmed in front of a live audience at the Outtakes Bar & Grill in New Hope, Minnesota on February 23rd.

With KISS currently on their End Of The Road tour, singer/guitarist Paul Stanley says his "Starchild" persona will never go away, even if he and Gene Simmons are on their final tour as members of KISS.

“That’s not something I’d put in a box,” Paul tells Sioux City Journal of his stage persona. “The End Of The Road is just the end of us touring.”

Could the other two members of KISS, Eric Singer and Tommy Thayer, continue on with new bandmates.

“There was a time when people said, ‘KISS has to be the original four members',” Stanley says. “Well, those people are 50 percent wrong. And all of this is conjecture. I’m not walking away from what Gene and I have built over 45 years. I’m of the mindset that teams don’t fold because their star pitcher or star hitter is gone. There’s an amazing pool of talent out there. Can it continue? Absolutely.”

KISS is on what Paul calls a “victory lap". “We’re celebrating everything that we’ve accomplished to this date. It’s everything we wanted to do in a two-plus-hour show.”