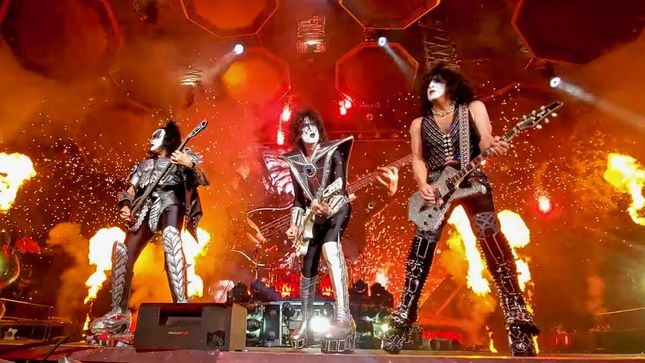 KISS has teamed up with Dynamite Comics for a KISS Zombies comic, in stores November 6.

A plot synopsis: “Decades after a zombie invasion has made humans an endangered species, the city of New Detroit is under siege. The people in charge have banned music, as the undead are attracted to sound, and have tried to rid the world of evidence that the greatest band in history have ever existed. Unwilling to live this way and take the leadership at their word, a group of teenagers set out on a dangerous trip to find KISS!

KISS' End Of The Road tour landed in Indianapolis on Saturday, August 31. The band have released new footage from the show. Watch "Black Diamond" below:

KISS are scheduled to perform next on November 16 at RAC Arena in Perth, WA. Find the band's End Of The Road tour itinerary here.

This November, KISS will play the first-ever show for great white sharks. (Turns out, they’re big fans.) Human fans can reserve their spot for this one-time-only concert event starting October 14. Brought to you in partnership with Animals on Airbnbexperiences!

What you'll do: Welcome to “Shark Rock City,” where KISS will perform a live set off the southern coast of Australia to entice sharks, who love the low-frequency sounds of rock and roll.

This once-in-a-lifetime ocean concert takes place on November 18, in Port Lincoln, where you’ll board a boat at 6:30 AM and cruise along the coastline looking for birds, dolphins, and other wildlife. For the main event, you’ll head out to the deep waters of the Indian Ocean - one of the biggest feeding grounds for great whites.

As KISS rocks out above water, you'll also get to see what's down under it. Watch from a glass bottom boat as the music attracts the legendary band's biggest (underwater) fans. KISS has played plenty of wild shows in the past, but this one will top them all.

Spots go on sale October 14, at 6 PM, EDT. Watch a video trailer below, and get more information here.