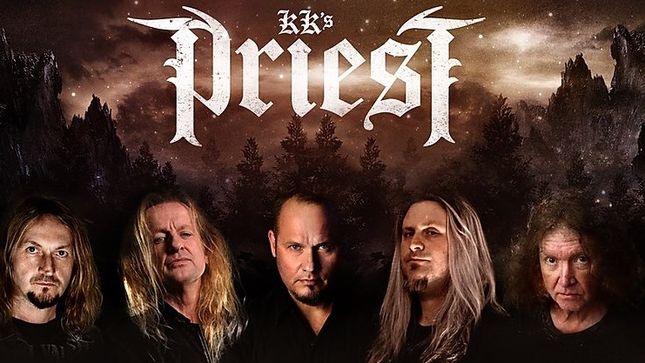 "A.J. was just 14 when he saw his first ever concert at our show in Birmingham, England in 2001 with Ripper on vocals, since then he has aspired to be a guitarist. Years later I was introduced to A.J. and his band Hostile through his uncle Steve who I went to school with. Needless to say I became involved and started to help where I could, producing their two albums and writing a song for them. The band went on to support internationally bands such as Megadeth, Manowar, Machine Head to name a few."

"A.J. is from my home town, so I feel very comfortable having him as a guitar partner and it’s good to keep connected to the origins and the birthplace of the original Priest."

"A.J. has gone from strength to strength as a guitarist, and please check out A.J. playing 'Beyond The Realms Of Death' with me at our one-off gig at the Steelmill last November (see video below)."

"We very much appreciate your support and look forward to presenting to you a new album which is well on the way and a world tour as soon as possible."

“Forging ahead with KK’s Priest was not only inevitable, but was essential for me to perform and deliver everything that is expected from me and KK’s Priest” says K.K. Downing. “Due to the massive demand and overwhelming support from fans around the world, I feel this is where I belong, and a set combining the true, classic songs and sound of Priest, together with great, newly forged metal tracks, is what fans can expect when KK’s Priest takes to stages around the world.”

KK’s Priest is hard at work in the studio creating the band’s debut album, which will be released globally by Explorer1 Music Group.