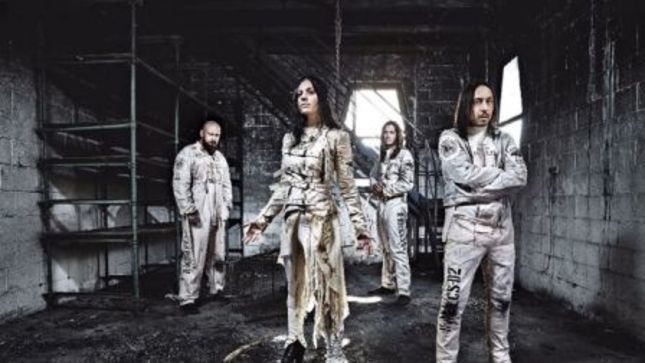 Italian metallers Lacuna Coil performed in the Philippines for the very first on April 30th at Amoranto Stadium in Quezon City as part of Pulp Summer Slam 16 XVI 2016. The festival is Southeast Asia’s biggest and longest-running metal festival- Fan-filmed video is available below.

Lacuna Coil are streaming the title track of their new album Delirium, which is set for a May 27th release through Century Media Records. Listen below. Marco "Maki" Coti-Zelati created the artwork for Delirium, which is based on an atmospheric session captured by Italian photographer Alessandro Olgiati.

“The House Of Shame”
“Broken Things”
“Delirium”
“Blood, Tears, Dust”
“Downfall”
“Take Me Home”
“You Love Me 'Cause I Hate You”
“Ghost In The Mist”
“My Demons”
“Claustrophobia”
“Ultima Ratio”

“The House Of Shame” lyric video:

Lacuna Coil will be making their much-anticipated return to North America as part of the Delirium Worldwide tour starting in San Francisco on May 7th. This will be their first US run in support of Delirium.

Following the first leg of the tour, which features Butcher Babies, 9ELECTRIC, and Painted Wives; the second leg (starting May 31st) will see Stitched Up Heart join the lineup as direct support while 9ELECTRIC and Painted Wives continue to round out the tour package.

# direct Support to Halestorm - LC Only
* no Butcher Babies
^^ no support