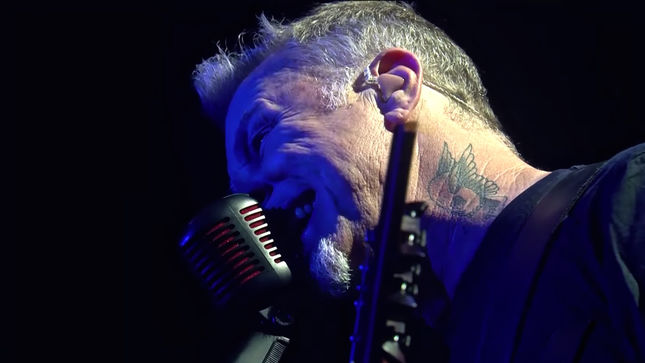 In a new interview with Apple Music’s Zane Lowe, Lady Gaga spoke about her respect and admiration for Metallica saying, “I was at Bradley (Cooper)’s house with Lars (Ulrich) and we were just hanging out. He’s amazing. “I went to see them live, I’ve seen them a couple times live, but I saw them recently… and we were watching the show and I’ll tell you something, those guys play better than they’ve played in their whole lives.”

Lady Gaga will take the stage at the Grammy Awards for a duet performance with Metallica at the 59th annual awards show live from the Staples Center in Los Angeles on Sunday, February 12th at 8 PM ET, on CBS.

About the awards show, Metallica previously stated: "We have something very unique and special planned for this celebratory night, so tune in to watch on CBS-TV.”

The following are nominated in the “Best Metal Performance” category at the 59th annual Grammys:

Nominated for “Best Rock Song” are:

Gojira are also nominated in the “Best Rock Album” for Magma. They’ll compete for the trophy with Blink-182 (California), Cage The Elephant (Tell Me I’m Pretty), Panic! At The Disco (Death Of A Bachelor), and Weezer (Weezer).

Disturbed are are nominated in the “Best Rock Performance” category for “The Sound Of Silence” (Live On Conan), up against Alabama Shakes (“Joe” Live From Austin City Limits), Beyonce featuring Jack White (“Don’t Hurt Yourself”), David Bowie (“Backstar”), and Twenty One Pilots (“Heathens”).

Elsewhere, Joe Bonamassa gets a nod for his Live At The Greek Theatre release, nominated in the “Best Traditional Blues” category.

For a full list of the nominees, visit grammy.com.