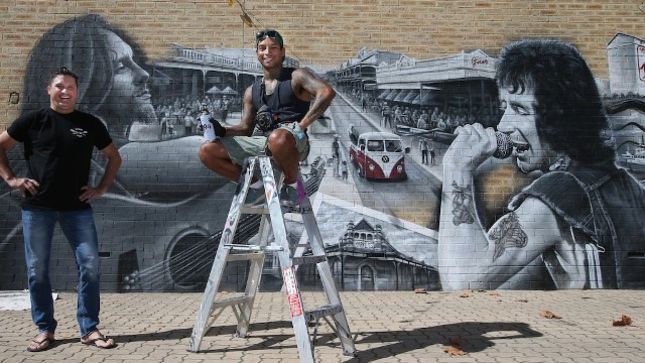 Accoring to The West Australian, legendary musician Bon Scott - who passed away in 1980 - has been immortalized along with other Fremantle icons in a larger-than-life mural at the historic Federal Hotel. Western Australia street artist Joseph Boin is creating the impressive visual display and said he wanted to represent Fremantle’s characters as well as its architecture.

“The original concept was buildings out of Fremantle ... from there we started with Bon Scott and I wanted to add other musicians,” he said.

Federal Hotel owner Nikola Jurin, who commissioned the mural, said the artwork reflected Fremantle’s blend of the contemporary and historic.

A permanent sculpture in tribute to Bon Scott was unveiled in Melbourne, Australia on Tuesday, March 6th. Video of the unveiling from Paul Cashmere can be seen below. The sculpture can be found in AC/DC Lane, exploding out of the exterior wall of Cherry Bar.

"I've painted the laneway annually for about five years now - always a varied interpretation of the theme of music and it’s an honour to add a permanent 3D element that pays tribute to a great Australian rock and roll band and its lead singer Bon Scott, but also to music in general," Makatron said.