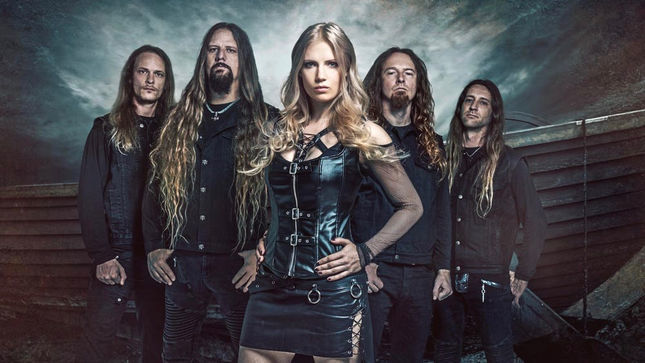 Leaves' Eyes have released an official video for the song "Across The Sea", taken from their forthcoming album Sign Of The Dragonhead. Check it out below.

AFM Records will release Sign Of The Dragonhead on January 12th. The band have announced the following release shows with special guests, Harpyie.

Produced by Alexander Krull at Mastersound Studio, the Sign Of The Dragonhead album features cover artwork by Stefan Heilemann (Lindemann, Epica, Kamelot). A video for the title track can be found below.

The hearts of symphonic metal fans will beat faster: Epic metal hymns, cracking rock songs, great choirs, powerful classical music, a top notch production and magic melodies - on top of it all Elina's outstanding voice. The energy of the latest shows and tours were taken directly into the music and studio recordings. The biggest Leaves’ Eyes record to date.

The London Voices choirs of Lord of The Rings and Stars Wars are back again, as well as the classical ensemble of Victor Smolski from Belarus and various folk, classical and percussion musicians. Once more Leaves' Eyes take the listener into the world of Norse mythology and Viking sagas. The dragon ship sets sail to new horizons. Full speed ahead!