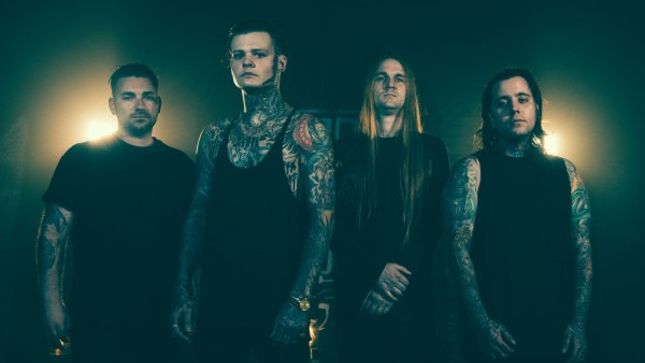 Lorna Shore’s forthcoming album, Immortal, which is due for a worldwide release on January 31, 2020, is nothing short of a shock of blackened, symphonic ambitions and epic intents. A video for the song “Death Portrait” is streaming below.

Austin Archey (drums) says: “’Death Portrait’ unveils the intensity and emotion we put behind this entire new record. Paired with a live video featuring footage from our first US headliner, I believe this gives the listener a proper journey through the darkness that was used to create Immortal as a whole.”

Formed in 2010, Lorna Shore were quick to surpass “local band” expectations with 2012’s Bone Kingdom EP and it’s follow-up, 2013’s Malificium EP, which peaked at #3 on the iTunes Metal charts. Through each release, Lorna Shore continues to prove themselves to be an increasingly formidable force and a ferocious live proposition. 2017’s sophomore LP, Flesh Coffin showed a band that had moved beyond mere “deathcore” trappings and had evolved into a modern metal band, as uncompromising and accomplished as any of their contemporaries or influences.

“We became the band we wanted to be, rather than just the product of our early influences,” says guitarist Adam De Micco. “Immortal is the latest chapter of that story of us as a band, as players and as people.” Armed with new vocalist C.J. McCreery (ex-Signs Of The Swarm), Lorna Shore has made a record that stands apart from their earlier works. The earliest hints of that have come with the release of album tracks, “This Is Hell” and “Darkest Spawn”, twin deathly salvos released from Lorna Shore’s early album sessions with producer Josh Schroeder (Battlecross, King 810, For Today) at Random Awesome Studios in Midland, MI. Recording for the album - which was initially intended for release through another label - was complete in mid-2019, leading the band to cement a deal with Century Media in late August.

“Signing with Century Media is the beginning of another chapter for us as a band,” states drummer Austin Archey. “We came through a lot tough situations: from changing members to even getting this record finished, that only pushed us to become a better band. We’re happy to share that with a label we’ve always respected.”

Lorna Shore will begin to showcase the sounds of Immortal as they hit the road in October with Fit For An Autopsy, Rivers Of Nihil, The Last Ten Seconds of Life and Dyscarnate for a month of US dates.

“I was truly surprised and excited by what the band delivered,” says Century Media US A&R, Mike Gitter. “It was light-years beyond any expectations or preconceptions I had for them - and I think that will be the case as new and old fans start to hear new Lorna Shore music.”

Says Century Media Director, Philipp Schulte: “We are very excited to welcome Lorna Shore to Century Media Records. The two previously released tracks, “This is Hell” and “Darkest Spawn” both from an early recording session of the upcoming album, showcase the band in top shape, but are just a premonition of what the new album holds in store. We are honored to release Immortal, Lorna Shore‘s new opus, as a prime example that extreme music done right is still of highest relevance.”

Tickets for all shows are available now.