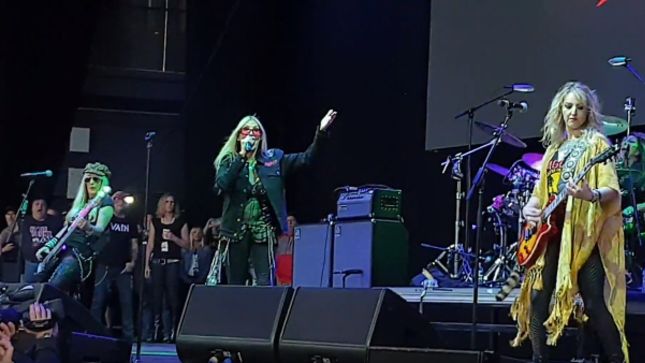 The Music Mania Podcast recently spoke with Femme Fatale vocalist Lorraine Lewis, who has replaced Janet Gardner as the frontwoman for Vixen. During the interview, Lewis commented on Vixen having added some Femme Fatale songs to their live set.

Lorraine: "I'm super flattered, super honored that they even brought it up. I was not going to push the issue at all. I mean, I'm stepping into Vixen. This is Vixen's deal; this is Vixen's show. Vixen is the forefront of women in rock. Aside from The Runaways, this is the only all-female band that I ever knew of was Vixen. I'm definitely stepping into their camp and want to honor their camp the best as I can. At the same time, I'm just flattered that they want to do a couple of Femme Fatale songs. They were hit songs. So it's really a cool thing to have Vixen…I turn and I look and I see Share (Ross) rocking to 'Waiting For The Big One' and I hear Roxy (Petrucci) on drums with those fills and it's effing awesome to see it and have them playing those songs. They play them impeccably. I just feel really, really happy. It's very cool to have Vixen performing Femme Fatale. It's very cool. I don't think that people knew that was going to happen. It's kind of a surprise when you come to a show."

Back in January, Janet Gardner announced she was leaving Vixen.

Janet: “After much soul searching and many sleepless nights, I have decided that it’s time for me to step aside and let Roxy (Petrucci, drummer) and Share (Ross, bassist) pursue their vision for the future of Vixen. Vixen will always have a very special place in my heart and I am incredibly grateful to have been a part of it. I would like to thank everyone for the amazing support over the years, and as Roxy and Share continue to keep the heart and soul of Vixen alive and well and I continue on my path, your continued support to all would be greatly appreciated. Love, Janet.”

Vixen first burst onto the scene in the 80’s and achieved large scale commercial success with songs like “Edge Of A Broken Heart”, “Cryin” and “Love Made Me”. The band has sold over a million albums, had six #1 videos on MTV, four songs on Billboard’s Top 100 and is the only platinum selling all female 80’s act. The band continues to write new music and tour with their eyes set firmly on the future.