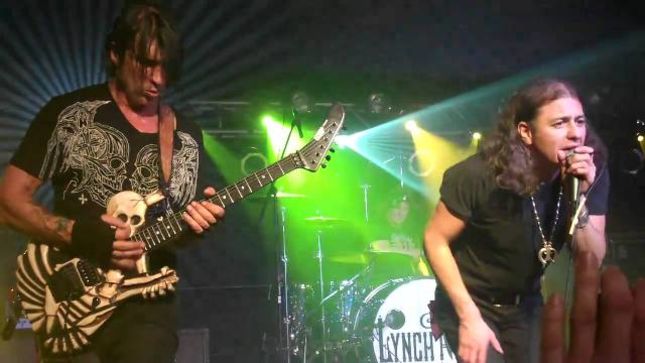 Lynch Mob vocalist Oni Logan has checked in with the following update:

"'A brother has left the building.'

As a new year shines a light so do new beginnings. Some that make the heart flutter and some that just have to happen. I've been the original vocalist for Lynch Mob on and off for many years, I've played a lot of great shows and traveled a lot of miles with this band, I'm very proud to have been a part of the recordings and the brotherhood. I'd like to say thanks to the fans who have continued to come to our shows over the years and for all your interest in what we had to say in our new recordings.

Very excited for 2018! I'll be putting together a new recording and touring project. Writing and recording has always been the most satisfying aspect in being a musician, I'll be looking forward to writing with other artist and bands, 2018 is wide open and I'm feeling a sense of new beginnings coming on...

Lynch Mob’s new album, The Brotherhood, was released on Friday, September 8th via Rat Pak Records. Check out a video for “Miles Away” below, and order the album at this location.

Produced by Chris "The Wizard" Collier (Flotsam And Jetsam, Prong, KXM), The Brotherhood features 11 brand new hard rock tracks. This album will surely resonate with long time fans of the band, as well as those longing for that good ol' hard rock sound and feel."The Brotherhood highlights the unique pairing of Oni Logan and George Lynch, and along with Sean McNabb (bass) and Jimmy D’Anda (drums), the band has created a solid offering from start to finish. From the heavy guitar riffs of the opening track “Main Offender” to the melodic album finale ”Miles Away”, Lynch Mob have once again proven they remain on top of their game and at the top of their genre!

On the subject of Lynch Mob’s new record, Oni Logan comments, “After doing quite a few miles together with this latest lineup of Sean McNabb and Jimmy D’Anda, we consider ourselves a pack of wolves, and we came up with the name The Brotherhood for the title of the next Lynch Mob album. It’s got more of an adventurous sound in part and maybe a darker, colder sound to it. We are always willing to go farther. We come from the early 90’s and it's when we released the first Lynch Mob album which set a sound and course for us. Here we are 27 years later, George and I are still able to keep on stretching. As a player, as a writer, that is very important to us. Otherwise we would be fooling ourselves and fooling you”.

George Lynch adds, "We wrote this album as a band and the name of the record reflects what the band is about, and what all my bands have been about since I've been a kid. This is my second family. These are my brothers. You go through a lot together and have a lot of experiences together. And that then becomes a part of the music."