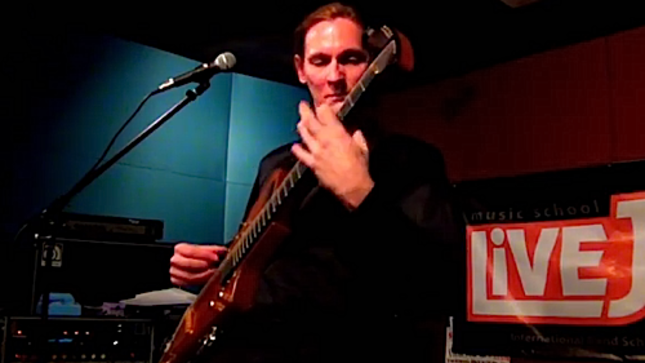 Guitarist Tim Donahue (Madmen & Sinners) spoke to BraveWords scribe Carl Begai in April about his current musical direction, which has focused on the harp guitar over the last few years:

"I don’t play the six-string fretless at all anymore unless I’m asked, like for the tracks on Nozomi Itani’s album (Station To Station from 2012). That was the first time I picked up the fretless in many years. Other than that I play the fretless harp guitar. I hate to say it, but the harp guitar has so much going on that when I pick up the six-string I yawn (laughs). I don’t mean that as anything against traditional guitars but the harp guitar kicks my ass and takes me to places I’ve never been."

Things have changed since that interview, and Donahue is now gearing up for a live gig this weekend in Tokyo, Japan that sees him back shredding on a fretless guitar. He spoke with Begai about his change in course:

"I finally got the two players together that I have always most wanted to get together to perform my heavy stuff: Akira Yamazaki on drums and Shigeru Nimura on bass. With that, Noise Machine is born. The opportunity to get us all together for a gig is the spark that got me back to playing the heavy stuff again. Can you believe it? I certainly can't, although it feels natural in a funny way. Heck, I just said in your interview that I wouldn't be playing the fretless any time soon.  I guess I lied. Still have the harp guitar music tugging and waiting to be performed, but Noise Machine already has some gigs coming up at classy venues, so I'll focus on that."

Check out the original interview with Donahue here.

Donahue released his self-titled Madmen & Sinners debut in 2004 featuring Dream Theater vocalist James LaBrie. He recently spoke with BraveWords scribe Carl Begai about the record and the album that could have followed:

“I love the heaviness of the tunes. There are a lot of heavy bands out there and I’m certainly not the heaviest guitarist, but the songs and the actual writing, I think that’s why the music hits you in the heart even though some of the songs are really heavy.”

“You should hear the stuff I wrote after that,” he continues. “I could have released the second album through EMI but the harp guitar kind of called me and took me away. There is a second Madmen album written and I like it better than the first one. I love the first album; I don’t like the way the recording sounds but I love the music. The second album is deeper but… maybe in another life.”

LaBrie’s participation on a second Madmen & Sinners album was never written in stone, but there is unreleased material with his vocals on them. Four tracks to be exact, albeit incomplete.

“I have these extra tracks with James singing on them,” Donahue confirms. “He really wanted to do them and I said that if we had enough time after we finished the first album, we would. We were in the studio and he really pushed to do those other four tracks.”