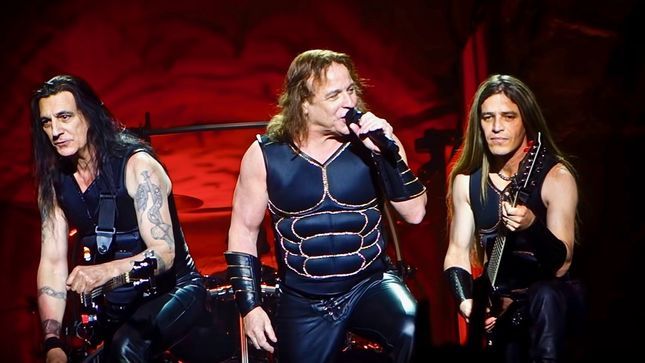 Manowar were scheduled to play France's Hellfest on Friday, June 21st, but the performance was cancelled. Regarding the Hellfest cancellation, Manowar has issued the following statement dated today, Monday, June 24th.

"Our performance at Hellfest scheduled for June 21, 2019 was NOT cancelled by the band; it was cancelled by the Hellfest organizers in their announcement that appeared on their websites. In the days prior to Hellfest, Switzerland, Greece, and Bulgaria all witnessed our massive production that brought The Kingdom Of Steel to life. We brought it to Hellfest because we came to play.

We fought to give our fans the performance we promised last year at Hellfest, but we will not be pushed around by the Hellfest promoters who chose not to honor their contractual obligations and think they can do wrong to us and to our fans. Those of you who have requested information regarding ticket refunds should contact the outlet where you purchased your ticket or the Hellfest organizers directly, as they are responsible.

We are currently seeking every legal remedy available to us by law."

Festival organizers issued the following: "Despite an on-site presence on Thursday 20 June, the teams and members of the band decided to leave the festival site. The concert of the artist scheduled this Friday, June 21 will not be possible for reasons beyond our control. We are sincerely sorry for all the fans of this artist, and more broadly for all the fans of Hellfest."

Manowar then posted the following statement via their official website and social media pages:

We always have and always will fight to give our fans 100%. Our French fans and press know, if Manowar come to France and are unable to perform, the fault does not lie with us. Remember the Élysée Montmartre. We are very sorry that you are being made to suffer. We want you to know that everything we do is for our fans. We stand together with all of you as we always have, and we will not allow anyone to lessen the quality of our shows.

Be very sure the truth will come out! Thank you to the Greatest Fans In The World for your continued loyalty and support."

On July 20th, during Manowar's show in Istanbul, Turkey, bassist Joey DeMaio vented on the matter and revealed they are now taking legal action against the Hellfest organizers.

DeMaio: "The truth of the matter is we have filed a lawsuit against Hellfest organizers. We don't fuck around. People try to fuck with our fans… nobody's gonna push Manowar around. We're not gonna give our fans less than a hundred percent. We don't take shit from anybody. And yes, we would rather give a hundred percent or nothing. And I'm sorry that people traveled from all over the world. You have no idea how sorry I am, how sorry Eric (Adams) is, how sorry Anders (Johansson) is, E.V. (Martel), our fucking loyal crew. We feel terrible. People flew from all over the fucking world to that place, and Manowar didn't play. But you know what? We're suffering for it, and the true fans will suffer along with us.

I believe we will win this lawsuit, and when we do, we're gonna take some money and we're gonna find a country and we're gonna find a city in that country that will have us, and we're gonna play a free concert, and the whole fucking world is invited. You have my fucking word that that will happen. You can believe on behalf of myself, Eric, E.V. and Anders, and the Manowar crew — the loyal crew that we've had for 30 years — we will do what we say. And don't listen to these fucking ass-kissing motherfuckers on the internet talk shit about Manowar and their rumors. None of those fucking assholes were even there. Do they have a copy of our contract? Were they backstage? Did they see what happened? No. They've got nothing better to do than play with their fucking little dicks and type on the fucking internet and talk shit about people. But we're the band that showed up there with eight fucking trucks, or however many we had, ready to play. And guess what? We never canceled. Yeah, that's right. The announcement came from them, on their site, but it was nice for people to say we canceled so they wouldn't have to listen to the fans bitch. So maybe those people should ask these fuckers some questions about what really happened."

Check out the video here.