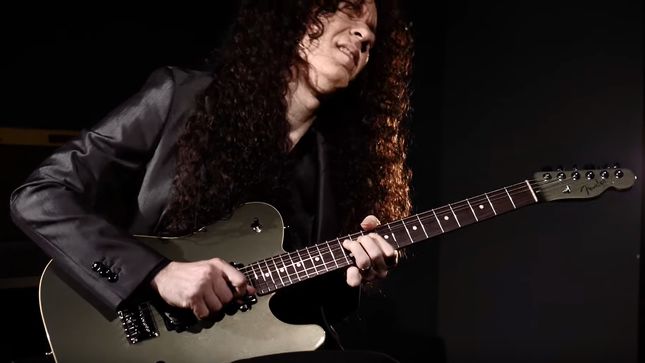 Marty Friedman (ex-Megadeth) has posted a list of "the 10 most annoying things that happen in recording and playing live."

Says Friedman: "Since everyone has off days, and even some of the most seasoned pros in the business drop the ball sometimes, I thought it might be fun to list up the 10 most annoying things that happen in recording and playing live. I'm sure many of you can relate! Here we go!

10. You work with an engineer for the first time (not applicable to long time acquaintances) and while recording, he talks about ANYTHING WHATSOEVER that is not directly related to what is being recorded at that moment.

9. You finish a show, you think you played better than usual, it was a rare night of miracles, yet after the show many people complain to you that the sound man had you too quiet in the mix.

8. You are doing a casual event like a guitar clinic or a meet and greet, and someone there thinks a strobe light is appropriate.

6. The monitor guy blasts your ear monitors so unbelievably loud that you try to rip them out of your head only to realize you can't because they are so well molded to your ears.

5. The engineer is not rolling when you do that long, "magic" take that was so inspired with so many ideas that you will never bring back again. (Actually this happened SO much in the analog days that I eventually developed the ability to re-play what I just played to a relatively good extent. Still it is EXTREMELY ANNOYING).

4. You are doing some kind of one-off show/event without your own crew/techs. You do a thorough soundcheck, complete with staff following you around with iPads saving settings. You get it perfect, tell the mixer not to touch ANYTHING before the show. He gives you a knowing nod, and a thumbs up sign. Showtime comes and every possible sound is drastically different.

3. When you're pissed at yourself for not being prepared enough for a recording session (or even a live rehearsal) and you have to sit there working out a tricky part in front of everybody, like a moron, while the clock ticks...

2. You're recording a part that is requiring a lot of takes and attention for one single part. The engineer plays the part from a slightly different spot EVERY. SINGLE TIME. This is a killer, and to be honest I've only seen assistant engineers do it. It happens more than you would think, and in nice studios too. I would not be surprised to see some guys get violently angry at this, as this is unbelievably annoying when you are trying to concentrate.

AND FINALLY the #1 most annoying thing that happens in the world of recording/live concerts...

1. ANYTIME, ANYWHERE and in ANY SITUATION your guitar tech hands you a guitar that is out of tune. This sounds trivial, but trust me, it isn't. Luckily this doesn't happen much, but when you are working-and sometimes in quite high pressure situations-and someone hands you a faulty work tool it can get pretty hellish.

"I see you guys nodding your heads out there... any more to add?! Which of these was the most horrific?! Stay safe!"