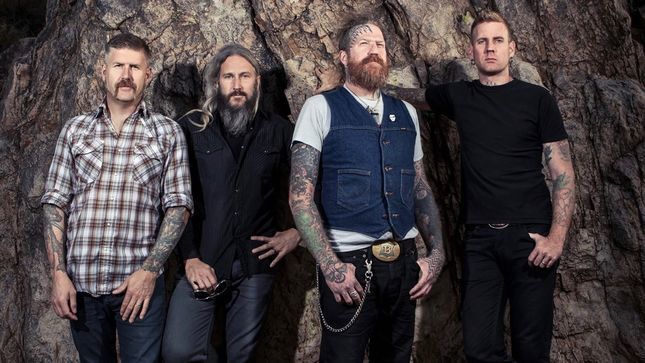 Speaking with Las Vegas Weekly back in June, Mastodon guitarist Bill Kelliher commented on the band's plans following the 10th Anniversary Crack The Skye tour, which wrapped up on July 3rd in Irving, TX.

"I just like to take it easy for the rest of the year, really. Just relax, spend time with my family, work on some projects at home. You know, slowly get back into writing. We’re all always writing; there’s lots of riffage and ideas floating around. But I don’t want to rush anything. We’ve got big shoes to fill with the last record, I feel like. I want to put out another great album like that, with heartfelt material that we’ve all worked on together. It’ll happen.

I think we need a little time to regroup. The band can’t be your entire life—just constantly touring and touring and touring, and then go home and write and write and write, and then go back out and tour, tour, tour. We’re all getting older; we have kids and families growing up. They need our attention, too. I live and breathe Mastodon for so long, and I think it might be good to step away for two months and then get back together and start picking up where we left off and start writing again.

I mean, I’m going to try and write as much as I can on this tour, on my days off, sitting around the hotel room. I’m not really worried about it. The next album will be great."

Speaking with Ultimate Guitar recently, Kelliher talked about the band's cover of the Led Zeppelin classic, "Stairway To Heaven", which they released on Record Store Day (April 13th) as a tribute to their late manager, Nick John, who passed away in September 2018. Following is an excerpt from the discussion.

Kelliher: "After he had passed away, we were talkin' the idea around about playing an acoustic version of a Zeppelin tune because that was his jam. His widow said, 'Can you guys play 'Stairway to Heaven' at Nick's funeral?' In our heads, we were, like, 'Oh, my god! Oh, my god! Oh, my god!' That's a beast of a song and of course, we said, 'Yeah, of course, we will. We'll do anything for Nick and you.'

We had a couple of days to rehearse it. You always think you know a song like 'Stairway to Heaven' but man, I had to sit there and really relearn it all and listen to it a million times. That's arguably the greatest rock and roll song ever written of all time. Know what I mean? If we were just gonna cover it for the fun of it, it was like, 'No, no way.'

Joe (Duplantier / vocals, guitar) from Gojira was at the funeral and he recorded the live thing on his phone and he was like, 'Hey guys, I recorded that. It was too beautiful to miss it.' My wife was there and she said, 'You guys should put it out for Record Store Day.' We went into the studio and we were going to do an acoustic version with no drums like we did it at the funeral. We started layering guitars and it started to sound amazing. Brann (Dailor / drums) was playing cajóns and when the drums kicked in it sounded like it was missing something. It was like, 'Man, Brann. You’ve got to get your kit out.' I remember Brett and I were listening back and were disappointed when the drums didn't kick in. We were so used to hearing big, giant Bonham drums so we were, like, 'Dude, you've got to hit the drums.' He went in did the drums and we had to redo some stuff because the timing was weird. We did it and it came out great. It gave me goosebumps."

Read the complete interview here. Check out the live version recorded by Duplantier below.

Mastodon previously commented on Nick John's passing: "He was essentially the band’s Dad. From our highest highs to our lowest lows he was always there. Every single move we made went through him first as our trust in him was marrow deep.

"His favorite band besides us and Gojira, was Led Zeppelin. We were asked to perform 'Stairway To Heaven' at his funeral. Afterward, finding out that someone had recorded it, we figured we should record a studio version and release it on Record Store Day (April 13th) as a tribute to Nick with all the proceeds to be donated to pancreatic cancer research. We would not be the band we are today without the help of Nick John. We miss him dearly and think of him always. We love you buddy."

The limited edition 10-inch vinyl features the Studio Version on Side A and a Live Version on Side B. All of the proceeds benefit the Hirshberg Foundation for Pancreatic Cancer Research.