MASTODON Guitarist BILL KELLIHER Talks New Album - "It's Moving Forward, And We're Kind Of Turning The Corner To The Next Thing" 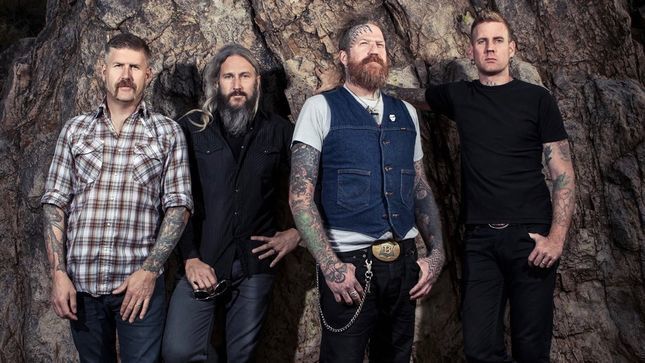 Guesting on Tone-Talk, Mastodon guitarist Bill Kelliher discussed the band's forthcoming eighth album. Following is an excerpt from the interview.

Kelliher: ""For me, our band, if you put our first album against even three or four albums ago, you'd be like, 'This is the same band? Holy shit.' It is no exception with our latest record that we're working on. It's moving forward, and we're kind of turning the corner to the next thing. I can't sit still in the same... like AC/DC - awesome band - every record they got to a point where they just have the same formula, three chords - awesome three chords. The Ramones, same thing; Slayer, same kind of thing. It really just kind of gotten that groove, I don't want everyone to get in that groove.

Let's put it this way: when we put a record out and there's half of our fans like, 'Fuck these guys! They're fucking selling out or they're turning a certain corner where we don't feel comfortable here anymore,' I feel like, 'You know what? We're gaining more people over here because we're actually growing as a band; because I'm still writing.' I mean, I'm 50 years old, but I'm going over there today. I'm gonna write something over there, I'm not just gonna go like this the whole time, and I feel like we have a lot of fans in the waiting who are like, 'Oh, I can't wait to see what they do next' because our past few records have been... we mix it up."

During a guest appearance on the Rock & Roll Beer Guy podcast on May 26, Kelliher revealed that he and his bandmates “wrote a killer fucking song” for the upcoming third installment of the Bill & Ted comedy film franchise, titled Bill & Ted Face The Music, reports Hamilton, Ontario radio station Y108.

“We got asked a couple months ago to be a part of the new Bill & Ted movie,” acknowledged Kelliher. “Working with Hollywood is always an adventure. They think that when you’re a musician, it’s like going to McDonald’s. They can just order what they want... and then there it is.”

“It doesn’t (work like that)… at least with our band,” noted Kelliher. “To write it, arrange it, record it, mix it and then master it? That’s gonna take a month — at least. You can’t just write a good song in a day and have it recorded. It doesn’t work that way. It’s not gonna have any soul.”

Though the music director for Bill & Ted Face The Music reportedly hand-picked Mastodon, Kelliher revealed it was a brief “20-second clip” that director Dean Parisot didn’t “really like.” The guitarist said that the producers wanted “an AC/DC-style” song. “I was like, then fucking call AC/DC. I was pissed.”

Furthermore, upon being asked if Mastodon could change the song, Kelliher replied: “No, I can’t. I’m not changing this, sorry. Just don’t use the song. Why didn’t you tell us that months ago? Especially now, with the pandemic, nobody can be in the same room together. It’s not like we live in the same studio and can pull stuff out of our ass all day long.”