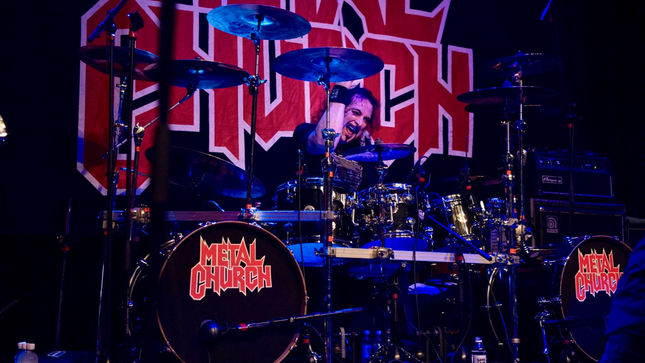 Metal Church drummer Stet Howland (ex-W.A.S.P.) is fighting a mystery illness, and is currently in a Massachusetts hospital undergoing tests.

On September 12th, Metal Church posted the following: “Unfortunately Stet hadn't been feeling well the past couple of weeks, but trooper that he is, he made it through the last few shows for our fans!! It started after walking around the flood waters of Ft. Myers and eventually he had to visit Tobey Hospital and get checked out.”

In an update, the band reveal: “A lot of our Metal Church fans have been asking about Stet Howland, so here is an update from September 20th, 2017:

“The best news is that physically, Stet is starting to feel a little better each day. He has moments of energy where he can hold a conversation and even stand and walk within the hospital room. He is getting an appetite back and eating almost two meals a day.

“Stet is still having severe "episodes" a few times a day. These "episodes" basically start with a fever and are followed by intense episodes of pain. The pain is literally incapacitating and it strikes his entire body. As the episode comes down, the pain localizes to one particular place in his body, sometimes an arm, sometimes a hip and eventually it levels off to a manageable level of pain.

“Stet was given a platelet transfusion on the 19th and his body has accepted them well and there is no internal bleeding. There is some fluid on his lungs that is not currently affecting his breathing.

“He has been moved to a bigger hospital that has a blood bank on site in case he develops a bleed and needs to be addressed quickly. Infectious Disease, Hematology and Oncology departments are working together. There have been literally 100's of blood tests ordered. He has had more CT scans and ultrasound and they completed a bone marrow biopsy.

“Stet is still in a holding pattern and fighting off new symptoms as they strike. The family are waiting patiently for a diagnosis and looking forward to Stet being stabilized so they can go home.

“All of your well wishes are really helping, so please keep them coming!”

Stay tuned for updates from the Metal Church camp.