METALLICA Drummer LARS ULRICH Talks Importance Of Family Life - "All Four Of Us Prioritize The Domestic Responsibilities; You Can't Put A Price On Sanity" 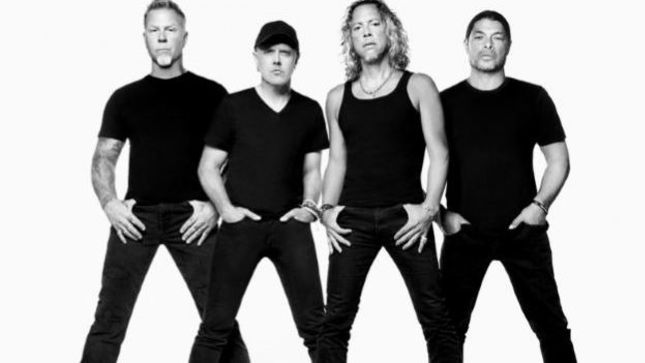 Kim Taylor Bennett at Noisey recently caught up with Metallica drummer Lars Ulrich for an in-depth and personal interview about his growth as a person and an artist. Following is an excerpt from the discussion.

Noisey: In the interim between this album (Hardwired...To Self Destruct) and the previous one (Death Magnetic), you guys talked about how you wanted to focus on family.

Ulrich: "It's important. The best thing that ever happened to this band is that the four of us, especially Hetfield and I, became parents more or less at the same time. It was 18 years ago, so if I'm 100 now… no, I was 35 when I had my first kid. It gave (Hetfield and me) an additional element in our relationship; it gave us something else to talk about. We were able to bond and connect over it and that's been really cool. The kids get along. In our band, the fact that all four of us prioritize the domestic responsibilities and all four of us took the turn at the more or less same time is really cool. It takes a while when you're in a band to figure stuff out.

Over the years, when you're fortunate enough to become successful, when you become successful you can become more financially independent. And so we've been able to put parameters on how we tour so we can spend more time at home. We have a two-week rule: we don't leave home for more than two weeks at a time, 16 days at the most. We did 180 dates on the last album in two week increments. It's not the most cost effective way of touring the world, but we believe you can't put a price on sanity. If you remain somewhat sane, than there's a better chance of finishing all the shows and not jumping off the deep end in despair and misery."

Chris Hardwick at Nerdist recently spoke with Metallica frontman James Hetfield and guitarist Kirk Hammett about the band's new album, Hardwired...To Self Destruct and their tour plans for 2017. They also talk about how to keep pizza warm while playing shows, how their kids feel about them being rock stars, and playing shows as they get older.

Hetfield: "My body has told me to tell these guys that 50 shows a year is kind of what we can do, so make the best of those. And I think we all kind of agree in that. But 50 shows a year, that's pretty good. My body can handle that. Body, mind and spirit all need to kind of revitalize themselves at home, and days off for voices so 50 shows a year, it goes pretty quick, I'm sure. I tell people, 'We're only doing 50 a year,' and they're saying, 'Oh my God! That's a lot.' And it's, like, it's not. It's not, really, compared to what we used to do."

Check out the podcast here.