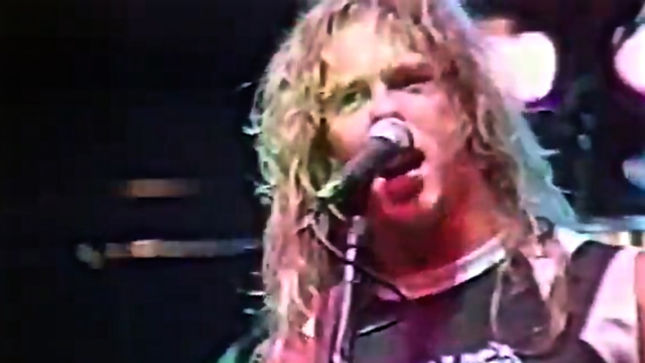 In this rare video, Metallica perform “No Remorse”, from their 1983 debut studio album Kill ‘Em All, live at Metal Hammer Festival at Freilichtbuhne Loreley in St. Goarshausen, Germany on September 14th, 1985:

On April 15th, Metallica will release deluxe reissues of their classic albums Kill ‘Em All and Ride The Lightning.

In a lengthy interview posted via Metallica’s official website, frontman James Hetfield speaks with Steffan Chirazi about the upcoming Record Store Day release and about the reissues. A couple of excerpts follows:

Steffan Chirazi: So, back to more of the things from the Kill ‘Em All era that you’ve stumbled upon while putting this release together. Has it all been wine and roses? Has there been some comfortable stuff, or have there been some moments and memories where you’re thinking that maybe you don’t want to put them in there?”

James Hetfield: “No. No, there hasn’t at all. At least for me. Letters from people that we know that lived it and were there, great. I think the idea of having people writing their memories of the time is great too, because everyone’s got a different reality of how it was for them, and it’s great to share those because I forgot lots of stuff. So we have all got our own memories, and it’s been piecing this puzzle of how it was back then. So the more people you have involved in it, the better. Obviously, because this Master Of Puppets book is happening along with this, it’s kinda easy to get into that mode, digging up memories, interviewing people, and all of that stuff. It’s kinda all happening at the same time, which is great, and God, the sound quality of the vinyl remastering is unbelievable. You know, Greg [Fidelman] was blown away by the test pressing and how much better it sounds, and this isn’t just me blowing smoke here.”

JH: “And all the old stuff, some of the outtakes. We have the equivalent of the FBI working on this stuff trying to find things from back then. You know, “somebody’s gotta have this,” and after the years and years of not thinking about it, you go “wait a minute, there’s gotta be a different version of this when we recorded it. Did we only record it once and that was that? What happened to all this other stuff?” So little things are showing up from the old studio. For example, “here’s the microphone you sang Kill ‘Em All on.” Are you kidding me? So I now have that here at the studio.”

SC: Let me ask you sonically, of the Kill ‘Em All and Ride The Lightning, of all the songs you were listening back to as things were being remastered, what were the ones that you wished you could sneak in and maybe redo or remix?

JH: “That stuff used to bug me a lot more, say 20 years ago listening to "Seek And Destroy”. Like they’re playing "Seek And Destroy" from the album at the Shark Tank as the [San Jose] Sharks come out. And there’s the guitar sound. And I'm thinking “oh, no, wish that it could be fatter and heavier,” but that’s how it was. Why would I change that? Why? That was where our heads were, that’s where we were sonically. That’s as good as we got it, and could have got it. So there you go, why would you change that? It’s the sound that is a part of the feel, is a part of the history, a part of the time.”

SC: One of the things I always loved about that Kill 'Em All, especially when I first heard it, was it was supper toppy and it was super punky. It wasn’t about speed, it was about attitude.

JH: “Right. Yeah, it was definitely not over-produced. You could say that.”

SC: So that was down to not being over-produced more than looking for a vibe, then.

JH: “God, we didn’t think about it. We might have said, “hey, we like how this sounds,” put on Discharge or something and they go “OK, we can do that.” I’m sure there were greater, more experienced minds in there that thought we knew what we were talking about but we didn’t. By Ride The Lightning and for sure by Master Of Puppets we had more of an idea what our sound should be and could be. You know, Ride The Lightning, it was night and day after Kill ‘Em All, learning that “wow we can do this?” and sonically making a huge leap.”

Metallica's recently announced headlining concert at Minneapolis' brand new US Bank Stadium on August 20th has completely SOLD OUT. Presale fan club tickets were made available earlier this week, followed by this morning's public on-sale, which sold out in less than 10 minutes.

Metallica's show in Minneapolis will be the first rock concert at US Bank Stadium, the new home of the Minnesota Vikings, as part of the opening weekend festivities.

Avenged Sevenfold will provide direct support, marking one of only a few shows the hard rock band will play in the country this year. Volbeat will open the show with their unique blend of rock, metal, and rockabilly.

In celebration of this year’s Record Store Day, on April 16th Metallica will be releasing a special exclusive CD titled Liberté, Égalité, Fraternité, Metallica! The artwork for the upcoming release can be seen below.

The nine-song set was recorded live at Le Bataclan in Paris, France on June 11th, 2003 and Metallica are donating all profits to victims of the attacks in Paris in 2015.