METALLICA - The Story Of "Enter Sandman" Featured In Professor Of Rock's "#1 In Our Hearts"; Video 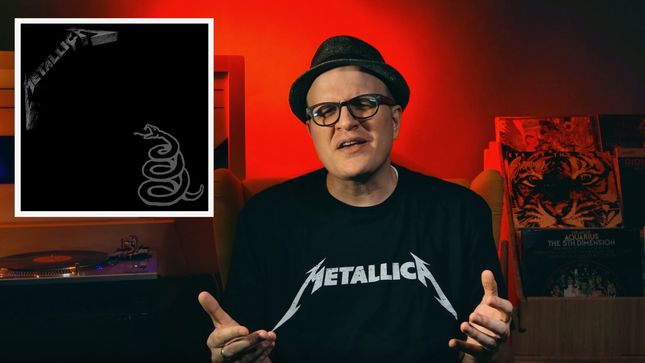 "It’s time for another edition of #1 In Out Hearts, where we talk about a song that should’ve been a number one hit, on the Billboard Hot 100. This one is no brainer.

“Hush, little baby, don’t say a word. And, never mind that noise you heard. It’s just the beasts under your bed. In your closet, in your head.” The menacing lyrics taken from the bridge of Metallica’s sinister 1991 metal lullaby, “Enter Sandman”.

"This stadium anthem was written by Metallica’s big three- lead singer James Hetfield, drummer Lars Ulrich, and lead guitarist Kirk Hammett. The “Sandman” is a character from Western folklore that makes children sleep, by sprinkling sand in their eyes - the stuff that sticks to your eyelashes that you wipe off when you awake.

"Although it was Fisher’s riff that influenced Hammett, it was not how the riff was placed in the Heart recording of 'Magic Man' that motivated him. Hammett revealed that he was actually roused from the way the 'Magic Man' riff was sampled in the track 'Personal' by Ice T, from his 1988 album Power. Hammett also said that the riff was inspired by Soundgarden’s 1989 album Louder Than Love. Hammett had been a Soundgarden fan from the band's very beginning and Hammet once remarked in an interview and I quote: "I was trying to capture their at­titude toward big, heavy riffs, like when the Beatles inspired the Byrds and the Beach Boys and then those two groups in turn inspired the Beatles. Metal alternative and grunge artists did the same thing. Pearl Jam was inspired by REM, REM was inspired by Nirvana, Alice In Chains crossed the lines of metal and grunge all of the time." Years later Soundgarden frontman the late Chris Cornell would cover the Metallica classic One in a mashup with U2’s identically titled song.

"On 'Enter Sandman', the original Hammett riff was only 2 bars, and Ulrich suggested that Kirk play the first bar 4 times, to give the riff a more melodic hook. Hammet said that Ulrich’s suggestions made it even more hooky. Another distinctive part of Hammett’s infectious guitar playing his use of the wah-wah pedal throughout 'Enter Sandman'.

“The popularity of 'Enter Sandman' catapulted Metallica's Black Album to sell more than 30 million units around the world.  It was the #1 Billboard Album in America in 1991 for 4 weeks, which was a huge feat for a metal band. 'Enter Sandman' not only propelled Metallica into the next phase of their career, it also vaulted them into world superstardom, as one of the biggest rock bands of all time. You might even say that Metallica’s 'Enter Sandman' won the world series 5 times as it was the signature song for the greatest relief pitcher of all time Mariano Rivera and certainly gave him motivation to mow down hitters on baseball’s biggest stage.

"The blood rushing, endorphin pumping end all be all jolt to the system. Metallica’s 'Enter Sandman' is #1 In Our Hearts. It is an exhilaration that rock music was meant to be, Taking any listener to Never never land with every listen."