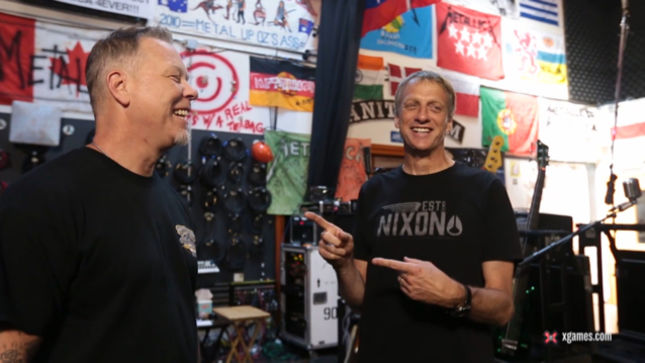 In the new footage below from ESPN, skateboard legend Tony Hawk talks with James Hetfield about the connection between music and sport at Metallica's HQ in San Francisco in advance of their X Games Austin performance June 6th.

Earlier this week, Metallica checked in with the following update: "Not only are we playing a show at the X Games, James and Kirk will also be performing “The Star-Spangled Banner” prior to the Moto X Speed & Style competition on Saturday, June 6 in Austin, TX. Click the link above for details.”

The San Francisco Giants’ Metallica day has become an annual event and the third was held on May 2nd, where the team faced the Los Angeles Angels. Metallica’s Facebook Page issued the following update on the day: “We're having a great time down here at AT&T; Park for Metallica Day with the San Francisco Giants! As you may have seen already, James & Kirk performed ‘The Star-Spangled Banner’, Lars threw out the first pitch and Robert called for the players to ‘Play Ball’.”