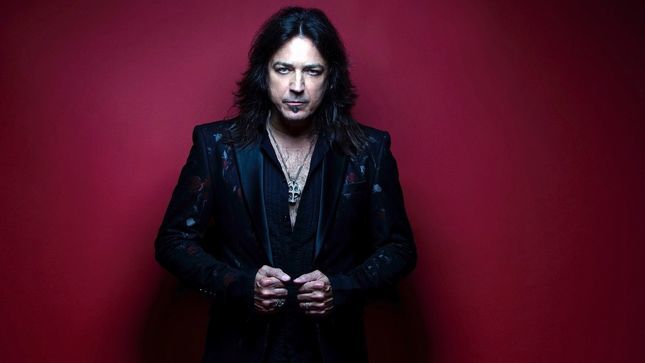 Jimmy Kay and Alan Dixon from Canada's The Metal Voice spoke to singer / guitarist Michael Sweet of Stryper, who will be releasing his upcoming solo album, Ten,  on October 11th via Rat Pak Records in North America and Frontiers Music Srl in Europe. Watch the interview below.

Sweet spoke in depth about his new upcoming solo album, his duet with Todd La Torre, gave hints towards the musical direction for the next Stryper album, and gave a quick health statement on Stryper guitarist Oz Fox, who is currently fighting brain tumors.

"I'll tell you the story behind that collaboration and I don't think Todd would mind at all. He and I are really good friends. Todd is a proclaimed atheist but when I look at Todd, I think he's more Christian than most Christians. The reason why I say that is because he's a nice person, he's just a good guy. There are proclaimed Christians that go on rants and do all kinds of B.S. that completely destroys the Christianity side of things, that maybe that doesn't represent Christ. But you know, Todd La Torre  is a great representation of God's love because he's just a great, loving guy. Now, when I asked him to sing the song and I sent  the lyrics to him, he was totally cool with it, and the reason why he said he was cool with it is because he respects everybody and he knows that I respect everybody. I'm not here to judge anybody and he's not here to judge anybody, so that's why he was able to sing those lyrics with the smile and with conviction; because he gets it."

On  plans and musical direction for a new Stryper album:

"Next year Stryper is going to make a new album. We go into the studio in January / February 2020  and the album will come out  mid-next year. I've got a few riffs I'm gonna really dive into over the next three to four weeks, getting a bunch of guitar riffs on my phone, and once I have nine, 10, 11, 12, guitar riffs in November / December I will lock myself away in a room and I'll just start going through songs. On the upcoming Stryper album we're gonna do some things where people are gonna hear it and say, 'You've gotta be kidding me.' Were going to surprise and shock people in a really good way. It's gonna be a metal album, it's not gonna be a pop album or pop rock or glam metal. We're gonna really pull some things out of the hat, man, try to blow people's minds."

"Oz just went to South America with us (Stryper) to play. We're hoping and praying for the best and that things turn around that he continues to get healthier and and stronger. Most important he can live a long healthy life, that's the priority. It's a balance between keeping people informed and retaining some sort of privacy for Oz and his family."

Building upon the success of his 2016 release One Sided War, Sweet returns with his tenth solo studio release, aptly titled Ten. The new album is scheduled for release in North America on October 11 via Rat Pak Records and will also be available in Europe via Frontiers Music Srl. Pre-order here, and watch a lyric video for the song "Ten", featuring Fozzy's Rich Ward, below.

On the subject of guest musicians Michael comments: “There is a different player appearing on every song. It started out where I was just going to have a couple of guest appearances on it, then I decided that it would be really interesting to bring in different players for every song. I started putting names out there and reaching out to people, and they started agreeing to do it. And then I had guys reaching out to me."